The UFC’s return this weekend has hit a snag, as middleweight star Jacare Souza tests positive for coronavirus.

Brazilian middleweight and former Strikeforce champ Jacare Souza (properly Ronaldo Souza) has tested positive for the novel coronavirus, ESPN has reported. As a result, his fight with Uriah Hall is off the UFC 249 card.

Despite the positive test, Hunter Campbell, EVP and Chief Business Officer of UFC told ESPN’s Stephen A. Smith that the show will go on. After conferring with the Florida Athletic Commission, it was decided that the system — in this case, swab testing fighters upon arrival in Jacksonville, and isolating them — had worked.

Souza reportedly informed the UFC upon arriving for Fight Week that a member of his family had tested postive for the coronavirus (SARS-CoV-2). He was then isolated in his hotel room, pending test results. Those test results have come back positive.

While Souza has for the most part been isolated, he did take part in the UFC 249 weigh-in Friday morning, hitting the scales at 186lbs for his middleweight bout against Hall.

Souza was reportedly asymptomatic in this instance.

UFC 249 is set to take place Saturday, May 9 at the Vystar Veterans Memorial Arena in Jacksonville, Florida. Souza vs. Hall was expected to be part of the televised preliminary card.

The coronavirus pandemic has now seen over four million infected with SARS-CoV-2 globally. Over 275,000 have died of the resulting disease, COVID-19.

Update: The UFC has issued a statement regarding the matter, confirming the fight cancellation. And revealing that two of Souza’s cornermen have also tested positive.

The middleweight bout between Uriah Hall vs Jacaré Souza will no longer be on the UFC 249 preliminary card due to one of Souza’s COVID-19 tests indicating a positive result. In addition, COVID-19 tests for Souza’s two cornermen were also flagged as positive. UFC’s medical team examined Souza and his two cornermen and found them to be currently asymptomatic, or not exhibiting the common symptoms of COVID-19. As per UFC’s health and safety protocols, all three men have left the host hotel and will be self-isolating off premises, where UFC’s medical team will monitor their conditions remotely and will provide assistance with any necessary treatment. From their arrival earlier in the week until their departure today, Souza and his cornermen followed UFC health and safety protocols, including practicing social distancing, wearing personnel protective equipment, and self-isolating whenever possible.There have been no other positive COVID-19 tests reported from the remaining athletes participating in UFC 249. The response to this development is indicative of the effectiveness of the health and safety measures UFC has put in place for this event.

“Jacare” very close with a group of people all certainly within 6 feet. pic.twitter.com/x1Dcus734G

In the footage, Jacare can been seen in closed quarters with a number of other individuals, including Werdum, who is scheduled to fight Aleksei Oleinik at UFC 249. While he is seen wearing a face mask and gloves, Souza is clearly not social distancing.

@JacareMMA Brother I know it sucks I’m sorry you have to go through this I am beyond devastated for the missed opportunity I wish you nothing but recovery for you and your family. 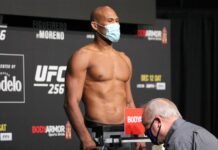 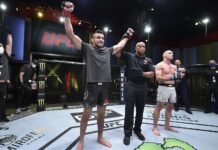