More details have begun to trickle out regarding the identity of the suspect in UFC fighter  Anthony Smith’s home invasion incident.

On April 5, the UFC light heavyweight confronted an unknown (to him) assailant who had broken into his Omaha, Nebraska home in the early hours of the morning. A wild fight ensued, which led to a bloodied suspect eventually being subdued by police. Smith, a long-serving member of the UFC roster at both middleweight and light heavyweight, has gone on record stating how surprisingly strong the much smaller man apparently was.

“I’m not lying when I said it was one of the toughest fights I’ve had in my whole life,” Smith admitted. Speaking to ESPN, he stated that “No normal human is able to fight like that. I’m by no means the baddest dude on the planet. But he’s a regular Joe and I had a hard time dealing with him. And he took everything that I gave him — every punch, every knee, every elbow. He took every single one of them and kept fighting me.”

The comments earned Smith some grief, particularly from former opponent Jon Jones, and surprisingly, UFC broadcaster Joe Rogan. Now, new video has emerged (available below), capturing the suspect on tape after a break-in attempt at another man’s home, prior to the incident at Smith’s. And as it turns out, the suspect might not exactly be a “regular Joe” after all.

.@lionheartasmith says he's still ready to fight on 4/25 even after he fought off an intruder at his home over the weekend. This is video for the suspect after he allegedly broke into another man's home before going to Smith's. Smith describes what happened.@3NewsNowOmaha pic.twitter.com/mGwSlTjimo

The man in question, previously named by police as one Luke Haberman, can be seen on video screaming at the top of his lungs during the break in attempt — typically not something a thief in the night is likely to do. His motives remain a mystery. According to a report by 3KMTV, who also released the video above, Haberman is being investigated for breaking into area vehicles as well. Police have speculated as to whether drugs were involved.

While Douglas County police did not respond to a request for comment from Cageside Press, an online records check indicates Haberman was charged with domestic assault in the third degree following an incident in February of this year. Haberman, 21, was also a member of the Bishop Neuman High School wrestling team in Nebraska, with 128 career wins following the 2017-18 season. The put him at the top of the school, historically, for wins all-time.

A twitter account associated with Haberman, initially viewable after the incident, has subsequently been removed, although can still be accessed via Google Cache. While there are several references to Haberman’s wrestling days, there’s no indication as to what led him down a path the culminated in breaking into a UFC fighter’s home. The account had not tweeted since late 2018, although one post read “Wtf am I doing #up #withmylife.”

Police continue to investigate the incident. Smith (33-14) had been linked to a fight Glover Teixeira later this month. However, all UFC events are now on hold due to the coronavirus pandemic. 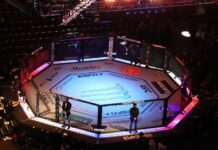