UFC Columbus was expected to take place later this month, and UFC Brasilia this very weekend. But that may change as a result of the coronavirus pandemic. SARS-CoV-2 and COVID-19, the disease that stems from it, has forced widespread cancellations, quarantines, and social isolation. The Ohio event, otherwise known as UFC on ESPN 8, and this weekend’s Brasilia card could be the next casualties.

On Wednesday, Ohio Governor Mike DeWine announced that he would be issuing an order, expected to be signed in the coming days, regarding mass gatherings in Ohio. That came after an earlier request that sporting events move forward in the state with minimal (family only) or no fans present. DeWine went on to say that aside from the obvious safety issue, certain organizations “need an order from the government” for various reasons, including legal ones, in order to call off events. In short, such an order “makes their life easier.”

The announcement was made during a press conference, during which a fourth case of the virus was confirmed in that state.

Hours later, a continent away, Brazil’s Federal District Governor Ibaneis Rocha also instituted a ban on mass gatherings. Under the ban, sporting events, concerts, and other large congregations — including masses — are banned for five days as of Thursday, March 12. The UFC Brasilia card goes down on the March 14.

The UFC did not respond to a request for comment regarding the Ohio situation earlier Wednesday. However, Brazilian outlet Combate reports that with this weekend’s Fight Night card just days away, the promotion is considering holding the event in an empty venue.

The Columbus Blue Jackets are the first NHL team set to host a game in an empty arena as a result of the outbreak. Soccer, basketball, and other sports have already done so. Major tours from Pearl Jam, Madonna, and other acts have been cancelled or rescheduled dates, while Hollywood star Tom Hanks is believed to have tested positive for the virus, along with his wife. The World Health Organization officially declared the coronavirus a pandemic on Wednesday.

Update, 3/12/2020 7AM: The UFC has cancelled its UFC Brasilia media day, issuing a brief statement regarding the decision. “Due to consideration of the government’s decree yesterday, Ultimate Media Day has been cancelled. Content featuring the athletes scheduled to fight in Saturday’s event will be captured and shared with credentialed media members in advance of the event.” 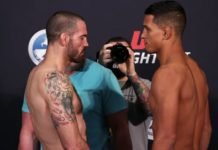 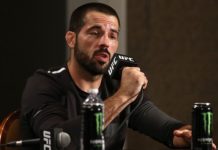