Las Vegas, NV — Paulo Costa stopped by backstage at UFC 248 following what can only be deemed a bizarre main event.

Costa (13-0) is the next man in line at middleweight. He’s been on the sidelines nursing a bicep injury, which paved the way for Yoel Romero to face Israel Adesanya in the UFC 248 main event.

It was a lackluster fight from the outset, marred by a lack of action, with little engagement throughout. Costa himself was supposed to be available for an in-cage face-off opportunity after the fight, but after leaping out of his seat at the end of the bout, security escorted him away.

Instead, the UFC brought him back to speak to media outlets including Cageside Press, for an update on his status, and opinion on Saturday’s main event. Which Adesanya won, on the basis of doing slightly more in the fight.

“I’m 100% right now. I did live sparring this morning. I feel great,” said Costa, who is aiming to fight in two to three months. “I think July 11 would be a nice, nice date.” That, of course, would be International Fight Week.

On the subject of the UFC 248 main event, Costa was a harsh critic. “Horrible fight. I was ashamed to watch that fight.”

“Adesanya is nothing. Adesanya is the most shameful champion I have seen ever,” the Brazilian proclaimed. “He just ran. He’s nothing, he’s nothing. He’s scared. I think he doesn’t deserve [me] talking about him. That fight was sh*t.”

“I will make him cry,” Costa promised. “I will hit him very badly, and he will cry like a baby. I will slap his face in my fight against him. He’s shameful.”

Costa seemed to put the full blame on the champion. “I don’t blame Romero. Romero is the same against everybody. He never puts 100% of pressure. He’s a little bit lazy, and sometimes he explodes. The fact is, Adesanya cannot hang with him.”

It’s not just Romero that Costa feels ‘The Last Stylebender’ cannot hang with, however. He sees a pattern of the champion avoiding more powerful opponents.

The UFC has yet to officially announce a fight between Costa and champ Israel Adesanya. But given his presence is Las Vegas, it’s clearly the direction things are headed. 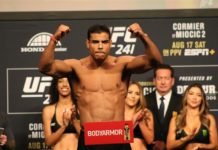 Luke Rockhold vs. Paulo Costa Lined Up for UFC 277 in July