Virginia Beach, VA — Zarah Fairn is part of a rare breed: a women’s featherweight fighter in the UFC.

Any number of fighters have flirted with the division: Holly Holm has twice competed for the title at 145lbs. Germaine de Randamie actually won it, against Holm, but was later stripped of the belt when she failed to defend it, and moved down to bantamweight. Macy Chiasson won season twenty-eight of The Ultimate Fighter at featherweight, then immediately cut to 135lbs; none of her cast mates have joined the division to date.

Fairn was actually looked at to be part of TUF 28. However, the UFC opted not to use her for the show. Instead, they wound up signing her directly. She made her debut last year against Megan Anderson. It did not go her way; Fairn was submitted within a round.

Prior to that fight she had been on an extended layoff. Not that she was away from the fight game, she told Cageside Press at Thursday’s UFC Norfolk media day. She just couldn’t for the life of her get a fight.

As she put it, Fairn was “inactive but never stopped. Inactive because basically no girl in Europe wanted to fight against [me].” Opponents were calling off fights, not wanting to take her on. Hence the reason for her inactivity — but she never stopped training.

Being in the UFC, where she can get fights, is “a big privilege,” she later added. Especially since the promotion has the best women in the world in several weight classes.

In her return at UFC Norfolk, Fairn goes up against another former Invicta champ, Felicia Spencer. The featherweights are in the spotlight, with four of them — all that remains outside champ Amanda Nunes — in action.

Fairn suggested that “strategically, the UFC put all the girls on the same card to see what was at stake, and to probably make a decision after based on the results that are going to happen.” With that in mind, however, Fairn added that “there could be any girl jumping in as well.”

That pretty much sums up the women’s featherweight division right now: wide open, with only a handful of athletes.

But should she win, she’s ready to tackle the challenge that is Nunes. “Obviously there’s going to be some adjustments to make and some serious training to put in,” she stated, but of course she “signed with UFC with that goal in mind and obviously [I] will definitely be ready.”

Recently, Fairn’s homeland of France began the process of legalizing MMA. A card there would clearly interest her. “Definitely it would be the cherry on the cake” to appear on a UFC card in France, Fairn said. 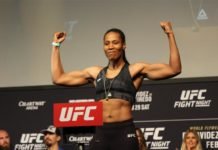 Zarah Fairn vs. Josiane Nunes Set For UFC on ESPN 22