UFC lightweight Alexander Hernandez (11-2) has not competed since July, when he defeated Francisco Trinaldo in a three-round unanimous decision. If you’re wondering why, it’s because the talented fighter, now hitting his prime at 27, has been on the mend.  “I had shoulder surgery,” he told Cageside Press this week, in the wake of UFC 247 in Houston, a card the San Antonio-based fighter might otherwise have competed on. “I went into that last fight with one arm. Just had to get the shoulder fixed afterward. Kind of repairing since then, getting back in the swing. My shoulder could only take so much load.”

“I’ve been back at full strength since the start of the year,” he revealed. Since then, he’s been “trying to get some fights going. Now it looks like I might have something. I wasn’t ready for that Houston card, it was kind of premature.”

Mum’s the word on who Hernandez might be fighting. The shoulder, meanwhile, isn’t the first injury for Hernandez. He’s also dealt with a knee issue, and a torn bicep. That latter “taught me a lot about proper preparation, warming up and cooling down, and not being a jerk off in between,” he admitted.

Essentially, he learned his lesson the hard way. “I went to this strength and conditioning session in the morning, and crushed it, and I was probably also tired, it was like an early morning thing,” explained Hernandez. “Cooled off, was running late to sparring on Saturday, just showed up, threw all my shit on and got to work. I threw this hook, my partner rolled inside of it, I just hit his head with my bicep, and it just popped off.”

Coming up, of course, is UFC Rio Rancho, a card timed perfectly, given light heavyweight Jon Jones defended his belt last week in Houston. This week, it’s the next two fighters in line, in what might be seen as a number one contender’s fight.

“Corey Anderson and [Jan] Blachowicz, that’s going to be such a good competitive fight, they’re both so tough,” Hernandez observed of the UFC Rio Rancho main event. “I’m kind of leaning towards Corey, but maybe it’s just because I’ve seen more of him. But that’s a hell of a fight.”

Against Jon Jones, however, “Neither guy would be pretty exciting,” Hernandez opined.

Which only leaves a couple of options. “I think if [Dominick] Reyes re-fights Jones, I think Jones takes him out. I think that was his shot right there. I think if he redoes it, it’s going to be far more decisive towards Jones,” said Hernandez. “So really it’s not terribly exciting for me to watch that fight again. Of course, Jones vs. Stipe [Miocic] is very exciting.”

Jon Jones moving up a weight class to challenge for heavyweight gold has been talked about for some time now. “But then there’s a part of me that’s like ‘well did you really win that fight [against Reyes] all the way though?’ The last few fights have been such nail-biters,” Hernandez continued, “that it’s almost like, do you go up and get that second belt, or do you kind of— but then I’m just sitting watching, it’s kind of ignorant to say you need to prove yourself. Because the motherf*cker has proved himself plenty, he’s the greatest of all time based on accolades.”

It seems, then, that Hernandez is siding with the Miocic idea. “The Stipe fight is definitely, above any other fight, the Stipe fight is a fight that I would like to see at some point in time. For sure.”

Watch our full interview with UFC lightweight Alexander Hernandez below! 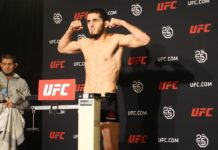 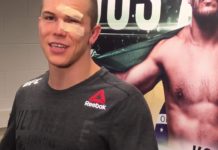 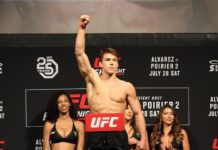