Pretty much the entire MMA community had a response to Saturday’s UFC 247 card. And like everyone else, American Top Team coach Din Thomas had a reaction to the scoring of the main event — and the judging controversy that emerged from the event as a whole.

Speaking to Cageside Press this week, Thomas gave his thoughts on both subjects, starting with the Jon Jones vs. Dominick Reyes fight atop the card.

“Honestly, I thought that the first round was pretty clear, the last two rounds were pretty clear,” Thomas observed, adding that “but I wasn’t scoring. This is just from watching it from a fan perspective, just like studying a skill perspective. I wasn’t watching it from a judging and scoring perspective. I’m still yet to do that, I want to go back and do that and score it accurately. Because I didn’t have a chance to do that.”

His reaction watching the fight the first time around, he said, was “Honestly if you said Jon Jones won, okay. If you said Dominick Reyes won, I’m like ‘okay, cool.’ To me it seemed that close, to where either guy could have won based on what the judges were looking for.”

As to Jones, in the early rounds, Thomas noted that “he was being out-fought. He was being beat to the punch.” Challenger Dominick Reyes “did a really good job in preparation to find holes on Jon Jones. But Jon is so good, he’s always able to make the adjustments and see if guys can make the adjustment back. And Dominick Reyes wasn’t able to do that.”

Getting back to judging, Jones vs. Reyes, which ended in a unanimous decision win for ‘Bones’ with scores of 48-47, 48-47, and 49-46 (the latter a point of contention for many), was not the only questionable decision on the night. Andre Ewell received a 30-27 score in a close fight with Jonathan Martinez. Angela Lee vs. Lauren Murphy and Derrick Lewis vs. Ilir Latifi had questionable decisions as well.

The solution, perhaps, could be to get away from the boxing model, and the 10-point must system. But that could entail building a new system from the ground up. Thomas, for one, doesn’t see an issue with that.

“This sport was built from the ground up, less than 30 years ago. Why can’t we?” he questioned. “These [judges] are still using number 2 pencils, they have number 2 pencils to write these scores down. It should be digital, and it should be posted at the end of each round. A billion dollar industry, and this is what these idiots are doing.”

Open scoring, the process of announcing scores each round, has been another talking point following the event. While UFC 247 was held in Houston, Texas under the Texas Department of Licensing and Regulation, the Kansas Athletic Commission has jumped into the fray, announcing earlier this week that they would offer open scoring starting in March.

“And that’s just to solve that problem,” he added. Making scores visible is one piece of the puzzle, but the entire system needs clarity. “It needs to be clear-cut. In football, if you score a touchdown, that’s six points, you know what six points is. You get a field goal, that’s three points, you know that. In our sport, it’s like, you can punch a guy in the face, but you don’t know the score, you don’t know that means.”

To hear more from ATT coach Din Thomas and his thoughts on the event, judging and more, watch our full conversation below! 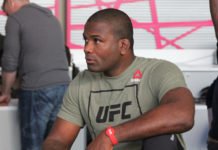