Justin Tafa needed all of two minutes to knock out Juan Adams and get his first win in the octagon at UFC 247.

Juan Adams made a big move last year, shifting his training to the famed Jackson-Wink MMA in New Mexico. Now, the Houston native was looking to put his hard work with a new camp to the test at UFC 247. Adams was the local boy and hometown favorite against Justin Tafa in a heavyweight scrap on the PPV card.

Tafa was in a similar spot that Adams found himself in before UFC 247. After three consecutive knockouts to start his career, Tafa fell short of expectations in his UFC debut when he was knocked out by Yorgan De Castro.

Adams started off the fight long, trying to use his range to keep Tafa on the outside of his punches. Adams threw a quick right hand and backed off as Tafa had his back to the fence. Tafa threw a quick punch that stiffened Adams up and dropped him, Adams ate a few more strikes on the way up. Adams wasn’t recovered when he stood up, and he ate a devasting right hook, right uppercut combination to end the fight, and put Adams out cold.

Justin Tafa is now 4-1 in his MMA career and showed the potential that many thought would be there in his first UFC appearance. He came up short there but made up for it in his sophomore appearance in the octagon. As for Juan Adams, after starting out his career 5-0 with lots of promise, he has now lost three in a row. His loss to Tafa is his second straight via stoppage. 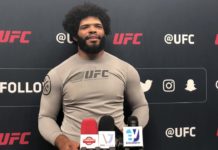 UFC Vegas 6: No Secret to Longevity for Aleksei Oleinik, but Family, Fans Help