Jonathan Martinez and Andre Ewell started out close, but Martinez began pulling away as their UFC 247 bout progressed. The judges, however, saw a different fight.

A couple of bantamweight fighters who once upon a time competed at flyweight outside the UFC were second in on Saturday’s Jones vs. Reyes early preliminary card from Houston, TX. UFC 247 had Jonathan Martinez and Andre Ewell in their fourth and fifth UFC outings, respectively.

Martinez was the winner of two straight coming into the night, over Wuliji Buren and Liu Pingyuan. Ewell, meanwhile, was hoping to shake off a loss to Marlon Vera.

Martinez threw a number of kicks early, including to the body and head, with a head kick blocked roughly a minute in. Ewell attacked with his jab and leg kicks. Another minute and Ewell found himself on the defensive, briefly hurt by a Martinez attack. Ewell recovered quickly and returned fire with a flurry of punches. Martinez fired off a knee, at least partially blocked by his opponent. Ewell’s reach was an issue for Jonathan Martinez, but he closed the distance looking for a takedown with just over ninety seconds remaining in the frame. That would lead to a battle of wills against the fence. In the end, Ewell stayed on his feet, and in the final seconds the pair opened up in a wild frenzy of punches, both men landing, with Ewell coming on strong right at the end.

Martinez opened up the second round with a kick to the lower leg. A second would follow, still within the first thirty seconds. Ewell targeted the body, connecting with his left a couple of times. A knee from Ewell also landed to the body. Ewell then uncorked a flying knee, which while blocked was certainly felt. Through all Ewell’s offense, however, Martinez continued to work in calf kicks, and the damage began to show. Around the final minute, Martinez connected with a pair of kicks to the mid-section, the second of hurt Ewell. He covered up, and ate a number of strikes for his trouble before the bell gave him a reprieve.

Swinging WILD to end the round!

Ewell and Martinez leaving NOTHING to chance! 😳 #UFC247 pic.twitter.com/iyOeor6iRt

Body attacks from both men, plus the calf kicks of Jonathan Martinez, were the story of the fight heading into the third. How much Andre Ewell could recover in the minute allotted between frames could be key.

Yet while Martinez may have desired to pick up where he left off, the pace slowed in round three. Ewell was acutely aware of Martinez’s leg kicks. He also appeared to have injured his right arm, off a Martinez kick, and began using it sparingly. If Martinez was aware, he didn’t show it — or at east didn’t target it. Instead, he slowed walked Ewell down, continuing to pick him apart. Ewell would occasionally throw with his injured arm, painful to watch. He came on at the very end, before the buzzer sounded.

After a delay because the computer used to tally scores crashed, Ewell was awarded a split decision win. A rather puzzling result, to say the least. Blame it on the PC. 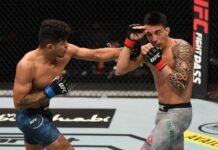 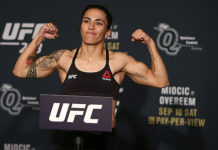