“I’ve been working on Reeses to hit me up, I don’t even need a sponsorship!” he joked. Though he’s concerned they downsized their packaging since his last fight, in May 2019.

Candy cravings aside, Daniels was backstage after another big finish in the cage. He improved to 2-0 on Saturday with a TKO finish of Jason King, a fighter with far more experience in the cage, who was vastly outclassed in the one-sided fight nonetheless.

King’s wife Emilee had competed immediately prior to her husband, defeating boxing champ Ava Knight. Daniels paid his respects to Emilee on his way to the back following the bout. Backstage, he explained to reporters including Cageside Press that he could sympathize, given he’s also married to a fighter — Colbey Northcutt.

In fact, said Daniels, he and his wife had considered the possibility of fighting on the same card themselves (Northcutt, however, is currently signed with ONE Championship).

While that wouldn’t come to pass, “I enjoyed fighting her husband, I was looking forward to the challenge because he was very experienced, and I want to show the MMA world that I’m ready to level up,” said Daniels. “And I think he was that next level up that I needed. I’m looking to continue to grow.”

Paying his respects to his opponent’s spouse, said Daniels, comes back to being “a martial artist at heart. So for me it’s about the respect, focus, and discipline. Even though we’re out there punching and kicking each other, I have no ill-will toward my opponent or his family. I want him to return to his wife and his children just like I want to return to mine.”

Summing up the fight itself, Daniels said that “things went great. My coaches were happy with me. I have different visions of different things I want to do. You guys saw a little glimpse of it in my last fight, with the 720.” That, of course, meaning his 720 degree knockout punch at Bellator Birmingham last year. “With this one, I had some different things that I wanted to perform, so I didn’t necessarily get the finish that I wanted. I don’t mind finishing with the ground n’ pound, I just don’t think it’s as elegant. It’s not as sophisticated, I’m not able to finish it with my pinky so to speak,” he joked.

“I like to have big finishes, things that will be heard around the world, so I wasn’t able to get that finish — but I did get the finish,” Daniels continued. “I was excited about it because I was at least able to show different elements of my game.”

Daniels is looking to do big things in 2020. Already Bellator’s welterweight kickboxing champion, he’s looking to make a run at the same title on the MMA side.

“I’m looking forward to being able to fight multiple times this year. My wife is fighting in March, I would love to fight in April,” said Daniels. A third fight for 2020, somewhere around July, appeals to Daniels as well.

“I want to level up on my next opponent as well. And then I’m looking to go up into the top tier,” he added, calling Bellator’s welterweight division “amazing” – particularly champ Douglas Lima, who Daniels says he’s a fan of. If all goes well, Daniels could presumably be in contention in a year’s time. 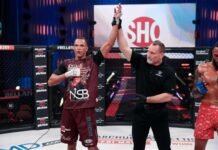