Raleigh, NC — If Curtis Blaydes is one thing, it’s consistent. Blaydes had been adamant all Fight Week ahead of UFC Raleigh that he was not about to get drawn into a stand-and-bang style war with opponent Junior Dos Santos.

Or anybody else, for that matter. So, not surprisingly, he relied on his wrestling against the former heavyweight champ. Even if it was to set up his own striking.

In the end, Blaydes earned a second-round TKO. Following the bout, which gives him three straight wins in the octagon, Blaydes spoke to media outlets including Cageside Press — and reiterated his plan to stick to his wrestling.

Blaydes now has three consecutive wins, over Justin Willis, Shamil Abdurakhimov, and now JDS. Arguably the biggest win of his career, up there with his 2018 victory over Alistair Overeem.

So is a title shot next? Even Blaydes doesn’t have the answer. “Is it? I don’t know, I don’t make the rules,” he said. “I would like for [the next one] to be a title shot but you never know. I hope, all you can do is hope.”

Of course, the weight class is a bit of a mess. Miocic vs. DC 3 is likely next, but there’s no time table set. Francis Ngannou, with a pair of wins over Blaydes, fights the surging Jairzinho Rozenstruik in March.

One thing is for certain, however. Curtis Blaydes doesn’t want to sit and wait. “Eight months is way, way too much,” he said when the possibility of sitting that long was suggested. “I like to be active, I like to get in at least three fights a year. I could wait five or six months but nothing I’m saying tonight is in stone. This literally just happened.”

And as Blaydes understands, there’s still those other names in the mix.

When it comes to beating a former champ, meanwhile, Blaydes said it didn’t really matter. “I don’t even think of that, because he was a champion before I was even fighting. So that’s not even in my mind. It’s old news to me. It feels good just to win, but that’s not even my favorite. My favorite was probably the Nashville one. Getting to beat up on that guy was a good one.”

For those keeping track, “that guy” was Justin Willis. 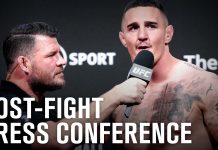