Las Vegas, NV — For flyweight Askar Askarov (11-0-1), his win over Tim Elliott was about silencing doubters. Askarov earned a three-round unanimous decision over the former title challenger at UFC 246 over the weekend.

“I’m very happy that I got my first victory in the UFC, because I received a lot of doubts after my first fight back in Mexico.” The doubt that he heard, said Askarov, speaking to media outlets including Cageside Press via translator, centered around the idea that he was not “UFC level.” That’s after fighting to a draw with Brandon Moreno at UFC Mexico City.

“I’m very happy that I finally got the victory,” he reiterated. Still, even flyweight contender Joseph Benavidez sided with Moreno in that draw.

“First of all, I didn’t lose that fight with Brandon Moreno, unfortunately for Joseph,” Askarov said when informed of Joe B’s comments. “Secondly, it was very difficult for me to get comfortable in Mexico, because I got there on short notice, like ten days before the fight. And third, I’m very glad Joseph is not a judge, he’s a fighter.”

Benavidez, of course, will be fighting for the flyweight title next month. As for the Elliot fight, well it was not low on action. Askarov connected with a punch early that seemed to leave Elliott out on his feet. Somehow, the American recovered, but it was “Bullet” who would take home the win.

Looking forward, Askarov is targeting the top of the weight class. “I hope to get some opponents from top five, to get closer to the title fight. But it’s the job of my managers,” he said. “They will do the job to get me a fight. They’re good at it, so hopefully I will get a top opponent next.”

A year ago, there was a real question whether Askarov would even be here. After all, the UFC seemed ready to do away with the 125lb weight class — just as Askarov was entering the promotion. “I’m happy that the UFC decided to keep the flyweight division, because I got [my] contract in the middle, when they were trying to close the division,” he said on that subject. “So I’m very grateful that they decided to keep the division, and they gave me a chance to show myself to the world.” 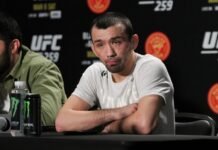 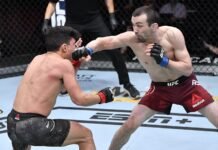