Welcome to the first week of 2020 with a major MMA promotion in action!

While the first few weeks of 2020 are light on the MMA front (at least until UFC 246), ONE Championship has decided to get things going early with A New Tomorrow, going down Friday in Bangkok, Thailand. They’ve got plenty of prospects in action — here’s a look at the most promising!

Nong Stamp (Stamp Fairtex) is a world kickboxing and Muay Thai champion, with a Muay Thai record of 63-15-5. She hasn’t shown a lot in her MMA career to date. That said, she’s shown her kickboxing and Muay Thai skills of course, and although she could throw more volume, she picks her shots well. Stamp in her second pro fight actually got two takedowns and secured the RNC finish. She fights Puja Tomar (4-3).

Thanh Le is a karate-based fighter and one of the most exciting known prospects out there. He has amazing power, kicks, and punches with lights out written on everything he throws. He has struggled with takedown defense in the past but has seemed to improve in that area doing better in his most recent bouts. Being 34-years old, Le is barely clinging to prospect status in terms of age, but he doesn’t have a lot of fight mileage. He tends to sit in the pocket and snipe his way in and right back out looking for the kill. He fights Ryogo Takahashi (13-3).

Joey Pierotti is primarily a wrestler but will strike when needed as he has power and accuracy. Still, in that area, he remains a bit green. Pierotti though is an excellent wrestler who times his shots well and is very heavy on top. He moves freely on top and can throw some heavy and damaging ground and pound from a short distance. He fights Raimond Magomedaliev (5-1).

Ayaka Miura is an excellent grappler who holds five submission wins. She utilizes good head-and-arm throws and executes double legs as well. On top, she is composed and fights really smart. Miura can go from submission to submission but specializes once in half-guard. Miura is excellent at finishing with the Americana and Scarfhold Armlock. She fights Maíra Mazar (6-2).

Fighting out of Russia, Ali Magomedkhanov has looked solid thus far, although the footage on him isn’t spectacular. Mainly a wrestler based on what is available, Magomedkhanov does a great job shooting low and completing big takedowns. He’s proved once on top he’s a problem who effortlessly passes into the mount. And once he gets the mount he likely finishes it with his ground and pound. He fights Ilya Gladkiy (3-2). 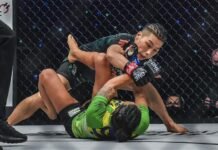