Having built an entire weight class around her, the PFL saw Kayla Harrison claim her throne at the PFL Championship 2019 on New Year’s Eve.

Kayla Harrison had defeated Larissa Pacheco once already in 2019. On New Year’s Eve, she got a chance to right the only “wrong” that she’d really suffered this PFL season. Pacheco had gone the distance with the former two-time gold medal Olympian during the league’s regular season. It was a feat Harrison wanted to ensure did not happen again.

The pair faced off at the PFL Championship on New Year’s Eve, inside the Hulu Theater at Madison Square Garden. A million dollars was on the line, as well as the inaugural PFL women’s lightweight championship.

Harrison held center early, firing a leg kick, while Pacheco leaned in for a straight right. Harrison caught a kick, and used that to drive her opponent into the cage. Knees to the Brazilian’s leg followed, and a trip takedown put Pacheco on her back. Pacheco closed her guard, but Harrison was able to fire off a couple of punches. She then moved to side control, albeit briefly before Pacheco trapped her in half-guard. Pacheco attempted to throw a few punches from the bottom, but was soon eating lefts from Kayla Harrison, who moved back to side control. Pacheco would try to scramble free, but Harrison’s top game was too much. The American would move to mount before the round came to a close.

Harrison again fired a leg kick to open the second, while Pacheco fired her right hand. Harrison then went upstairs with a kick, and later simply powered through a double-leg takedown, putting Pacheco on her back. Harrison would move to mount for a time, looking to score some damage. Larissa Pacheco would try to power up, only to find herself dragged back down, with Harrison controlling her back. Harrison was able to pull Pacheco back to her, sinking both hooks in. Harrison then smoothly transitioned to mount in a scramble. Pacheco got half-guard back, but for the second straight round, she had no answer to Kayla Harrison.

The third round saw Harrison make her first misstep. A takedown attempt backfired, with Pacheco landing on top. Harrison powered out, however, though she ate a glancing knee in the process. Harrison then drove Pacheco into the fence, and dragged her to the ground. Pacheco opted for a closed guard this time. That didn’t work for long. Harrison began looking for a choke, but the Brazilian survived for the time being. Pacheco fired elbows and hammer fists from the bottom, while Harrison threw some looping punches from on top. She worked the body and head before Pacheco pushed her off. Avoiding an upkick, Harrison moved back on top in the final seconds of the round.

Round four opened with Larissa Pacheco landing a right hand. Harrison fired a big overhand left moments later. Another one of those followed. A third left almost had Harrison eat a counter. Pacheco went to the body, but Harrison scored another huge double-leg takedown. The flashes of stand-up may have simply been to lull Pacheco into a false sense of security, in retrospect. Harrison controlled from the back and fired off left hands to the side of the head. Pacheco would roll to her back, securing half-guard. Harrison pulled free, moving to side control and landing ground n’ pound. Pacheco nearly managed to sweep late in the round while Harrison was standing with the Brazilian still on her back. Harrison, however, quickly escaped the danger.

There was no question Larissa Pacheco needed a finish heading into the fifth and final round. To do that, she needed to stay upright. On that front, Pacheco succeeded through the first two minutes of the final frame. When Harrison changed levels Pacheco scrambled free. Pacheco used that momentum to uncork a few solid strikes. Harrison was circling, on her bike, staying out of striking distance. Another takedown attempt saw Pacheco latch on with a front choke. Harrison pushed her back to the cage, Pacheco refusing to let go. When the American did pull free, she fired off a high kick. Harrison continued to circle, but when Pacheco closed the distance, Kayla utilized a judo throw to take the fight down for the first time in the round. That sealed Pacheco’s fate — she did not get up again.

Kayla Harrison didn’t get the finish she was looking for. But her star turn was complete after New Year’s Eve 2019. A million dollars, a championship belt, and another win atop the highest-profile PFL card of the year. 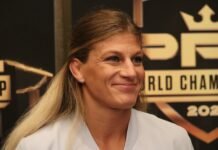