Jared Rosholt might be known for his wrestling, but it was Ali Isaev dominating in that department at the PFL Championship 2019.

The heavyweight finale of the PFL’s 2019 season featured former UFC standout and decorated wrestler Jared Rosholt, against the undefeated Ali Isaev. Rosholt, who ran up a 6-2 record in the UFC before being sent packing thanks to his wrestling-heavy style, represented the toughest test to date for Isaev.

Rosholt opened the heavyweight finale with a probing leg kick. A second had a little more on it. A spinning kick from Isaev seemed to just miss Rosholt. Isaev then moved in for a takedown, getting wrestler Rosholt to his back. Isaev moved to side control, using a headlock, while Rosholt worked to escape. As they got back up, he pressed Isaev up against the cage. Isaev, however, managed to turn the tables, and soon, Rosholt was on his back again. Working back up, Rosholt was in a peculiar predicament: being beaten at his own game. Rosholt would throw out a couple of jabs, but a spinning back kick landed for Isaev.

The second round had Isaev walking Rosholt down – but moments later, he’d fan on a kick that would have been clearly illegal, as Rosholt was a downed opponent. Rosholt then stumbled getting back up, and wound up slammed by Isaev! On his back again, Rosholt ended up trapped in a crucifix. He’d survive, but Isaev wound up in half-guard, still in control, working the body and head with short punches. Not finishing blows, but enough to maintain his position. Indeed, he’d ride out the round on top.

Isaev fanned on a spinning kick to the body to open round three. Rosholt landed a couple of strikes, but was soon taken down once again. Rosholt would eventually escape, and close the distance with a few strikes, pressing Isaev up against the fence. But he was mostly ineffective, with Isaev finding far more success overall. However, the duo had slowed to a crawl by the end of the third, a striking attempt or two by Isaev not withstanding.

A wheel kick from Isaev opened round four, connecting upstairs on Rosholt. It didn’t have enough behind it to do serious damage, however. Rosholt instead pressed forward, putting Isaev against the fence. From there the American worked on a takedown. With that not forthcoming, the pair traded knees and short punches. A move back to center was followed by Isaev backing Rosholt up to the fence, then taking him down. The pair looked winded with a couple of minutes left in the fourth round. Isaev would get into guard and land some heavy left hands, and with a sudden surge of energy, he was able to do enough to secure the TKO win! 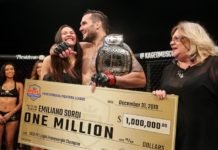 Fighter Compensation: Is the PFL on to Something?