Texas native Geoff Neal wonders if his fight Saturday at UFC 245 against Mike Perry might be even crazier than expected.

Las Vegas, NV — At UFC 245, surging welterweight Geoff Neal (12–2) will take on the always game ‘Platinum’ Mike Perry. It’s a recipe for violence with Fight of the Night potential, frankly.

Geoff Neal rides a tidal wave of momentum into UFC 245 this weekend. The Fortis MMA alum out of Dallas is 4-0 in the octagon so far, training with a gym that is yet to truly get the respect it deserves. “We need a UFC title. That’s what we need,” Neal told Cageside Press at the UFC 245 media day this week. “All the big gyms in the UFC, they all have titles. That’s what we’re shooting for, that’s what we want and that’s what we’re going to get.”

Neal, a transplant to Dallas, might be right. He might also be the first to do it for the team, if he continues fighting the way he has. In a stacked welterweight division, however, he has a ways to go. He’s not feeling the pressure just yet, however, win streak or not.

“It’s the same amount of pressure for everybody. Because I don’t want to lose ever, at all,” he explained. “It doesn’t matter if I’ve already lost before the UFC. There’s no added pressure. I just want to exit the fight with not a scratch on my face and get my hand raised.”

Ahead of the Perry fight, Neal’s opponent has been uncharacteristically pleasant. At least, the usual trash talk has yet to transpire. “I actually like that. It’s cool. He might be trying to lull me to sleep, trying to play the nice guy right now then come into the fight day real crazy. If that is real, that’s just him evolving as a fighter. Which could mean it’s going to be an even crazier fight come Saturday.”

It’s hard to imagine what a crazier fight with Perry might look like. But Neal, a former football player, is ready for anything. And maybe that sports background will give him an edge. Playing as a defensive end, Neal recalled that “I always liked to fight, but I’d never seen myself as a fighter. I wanted to be in the NFL. That was the goal.”

His path to success on the field? “I was mean, I was aggressive, I used my speed to my advantage.” Sounds like a good game plan Saturday night.

Watch our full UFC 245 interview with Geoff Neal above! 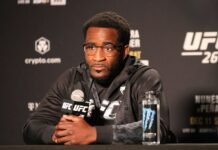 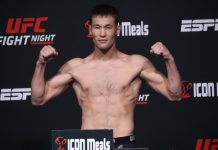