Cage Warriors’ first event of the New Year will go down in Manchester, England, and is set to be headlined by newly crowned Bantamweight champ Jack Cartwright.

Over a dozen names have been announced for Cage Warriors debut event in Manchester. The event, Cage Warriors 112, will be the first for the promotion in 2020.

Headlining the Manchester card will be reigning bantamweight champion Jack Cartwright (7-0). He’ll put his belt on the line in his highly anticipated first title defense. Cartwright’s opponent has yet to be named.

Last time out, the Manchester native finished Scott Malone and Marko Kovacevic in the first round to win the Bantamweight Title Tournament at Cage Warriors Unplugged 2 in September.

Also announced this week, UK welterweight Adam Proctor (11-1) will join the Manchester card. So too will Martin Stapleton, Adam Ventre and Mick Stanton. The latter will enter the new year having won all three of his fights in 2020.

Manchester, of course, is the home of former UFC middleweight champion Michael Bisping. ‘The Count’ would defend the belt at home against arch-rival Dan Henderson at UFC 204 in October 206, his only title defense.

Cage Warriors 112 will take place March 7, 2020 at the BEC Arena in Manchester, England. 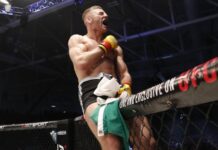