No UFC, no problem. This week, the big players in MMA are all silent. The UFC, ONE Championship, Bellator, Invicta FC, KSW, RIZIN — not a single promotion is in action.

That doesn’t mean there’s a total lack of MMA, however. And there are still lots of prospects to watch out for, after you fill up on Thanksgiving turkey and all the fixin’s.

A cousin of UFC champ Khabib and brother of fellow prospect Umar, Usman Nurmagomedov on the feet is a kickboxer at heart. He doesn’t throw with much power but he’s flashy and diverse with his attacks. He will throw spinning kicks, roundhouse kicks, and question mark kicks. Usman stays unpredictable attacking with all limbs and throws combos with just his legs alone. His wrestling is good, as well as timing double legs and on top. Simply put, he is a big threat. Albeit one that needs a step up in competition. He fights Roman Golovinov (9-3).

Sheikaev doesn’t have much on the feet but did knock out an opponent in just 50 seconds, in addition to showing decent power previously. The wrestling, on the other hand, is solid but the work he does on the mat is fantastic. His ground-and-pound is effective but his jiu-jitsu is superior, and he does hold four submission wins. He is coming off almost a two-year layoff so he may be rusty. He fights Erzhan Estanov (16-8-1).

First of all, Piraev’s record won’t go unnoticed with 28 wins and only two losses – and at only 26 years old. Those losses were to the undefeated KSW lightweight champ Mateusz Gamrot and to top prospect Tofik Musaev. Piraev spends a lot of his fight time on the feet where you can see him looking for a big shot while throwing many step-in knees, flying knees, and head kicks — which he disguises well with his movement. He moves in and out deftly, exploding with punches and then back out quickly. His record boasts ten submissions, and all that is set up by his well-executed wrestling. Piraev could tighten up his takedown defense which would be his one flaw. He fights Rodrigo Caporal (14-8).

Bramhald has some experience in kickboxing going 4-0 in K1. Only losing to good fighters in Luke Shanks and Scott Malone, at just 25, he has a promising future. On the feet, he’s very technical and throws a lot of output. Bramhald is dynamic and does a great job throwing with his punches and kicks. Not the most powerful but has everything else. He fights Declan Williams (13-12-3).

Only 6-1 as a pro, Yousaf went 10-0 as an amateur and was the 2016 IMMAF Featherweight World Champion. Yousaf is dynamic on the feet with both his kickboxing and his counter-striking along with the great timing he has. His ground game is arguably his best aspect. His jiu-jitsu is also fantastic, as he has a very active guard as well. He fights Rachid Haz (7-1).

Prado is a good talent who is the current SFT champion. His only loss is to another solid prospect in Joanderson Brito. Prado on the feet is scrappy but much more talented on the mat. He has solid BJJ with eight of his wins coming by submission. On top he’s proficient passing into better positions fairly easily, making him a big threat. He fights Marcos dos Santos (32-13-1) who is another solid test for him.

Still a young talent at just 19-years-old, Matsumoto has looked good against decent competition. He’s primarily a grappler who doesn’t have too much going on the feet. Matsumoto only has three submissions but is a big threat always looking for them. Especially the anaconda choke, which is one of his go-to’s. A good grappler but he needs some work. He fights André Azevedo (10-8).

Ruffy doesn’t have enough fights nor the ring time to really tell how good he is but this guy could be the real deal. The Brazilian hasn’t had much in-ring time because he has blitzed past his opponents, finishing three of his four fights in under two minutes. Ruffy holds a lot of punishing power in his hands, making his opponents just give up due to the massive amount of damage they take. So much is still unknown about Ruffy, but he’s worth the watch. He fights Manoel Souza (3-0). 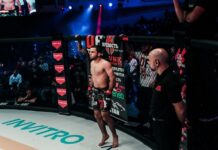