Brad Riddell will have home court advantage when he faces Magomed Mustafaev at UFC Auckland this coming February.

A lightweight bout featuring New Zealand’s own Brad Riddell is lined up for the UFC Auckland card in February 2020. On Tuesday, MMA Junkie, citing Tass.ru journalist Igor Lazorin, reported that Riddell had been booked against Magomed Mustafaev at the event.

Riddell had previously indicated his involvement on the card on social media, but did not have an opponent set at the time. It appears one has now been found.

Riddell (7-1) made his octagon debut at UFC 243 this past October against Jamie Mullarkey, a fight that would go on to earn Fight of the Night honors. Riddell won the bout via a unanimous decision. That extended his current win streak to four.

Magomed Mustafaev is also a recent bonus winner. Mustafaev (15-2) earned a Performance of the Night honor against Rafael Fiziev at UFC St. Petersburg in April. That marked his first bout since 2016, while the Russian fighter dealt with an arm injury suffered in a bout against Kevin Lee. Overall, he’s 3-1 under the UFC banner.

UFC Auckland, expected to air on ESPN+, is set to take place February 23 (or February 22 in North America) at the Spark Arena in Auckland, New Zealand. 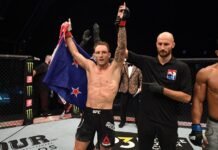 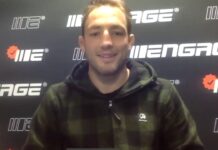