The UFC will, as expected, return to London, England next year, with an event on March 21, 2020 at the O2 Arena being officially announced.

In what has become a yearly tradition, the UFC will return to London, England this coming March. Promotion officials announced Friday on social media that March 21, 2020 would be  the date for the UFC’s next trip across the pond. No fights were announced for the card, though Robert Whittaker and Darren Till managed to agree — at least among themselves — to a fight.

Whether that’s a fight the UFC chooses to book remains to be seen, but there are certainly worse ideas for a headliner. Regardless, tickets for the March 21, 2020 card will go on sale January 31.

This year’s UFC London card will mark the promotion’s 12th visit to the British capital. It made its debut there all the way back in 2002 with UFC 38, titled Brawl at the Hall, which took place at the Royal Albert Hall and featured Matt Hughes defending his welterweight title against Carlos Newton.

Aside from a stop at Wembley Arena in 2013, the remainder of the company’s visits to London have gone down at the O2 Arena, and that will be the case once again in 2020.

The London card does not yet have an official event title or number, but is expected to be a Fight Night card airing on ESPN+. 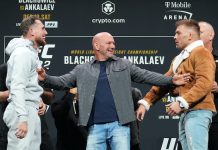