Get to know welterweight prospect Tobias Baker ahead of his fight against Aaron Thomson for Pure Combat: Battle For The Brave.

We caught up with Pure Combat welterweight Tobias Baker (2-0) ahead of Battle for the Brave this weekend, to talk about about his “nickname,” how he got into the sport, and more. Baker is fighting Aaron Thompson, who stepped up on short notice after John Simon suffered an injury in training.

I started my MMA journey when I joined Calaveras Martial Arts when I resided in Minot, ND. That journey began though around age 9 or 10 when I met Matt “The Hammer” Hamil at a function with my parents. He was extremely kind to my family and actually wrestled in college. I looked up to him and found a great appeal in wrestling just a few short years later. I grew up watching the greats when MMA was still not recognized on a national and international scale as it is now.

What is the reason for “The Heathen” nickname?

This question is interesting in itself. “The Heathen” isn’t a nickname as much as it is my personality. I live like a heathen, I respect few and fear none. I have a heavy Norwegian background and tend to admire the Vikings and Norse history. They were fierce warriors and so am I. I’d like to think this is always war and heathens are always ready for war.

I grew up playing football but discovered wrestling shortly after my father passed and I wrestled from middle school through High school. I also competed in Olympic powerlifting and did well. 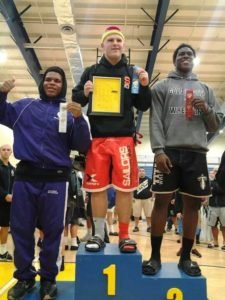 Yes, this is my career, I made that decision the second I began this journey. I’ve given up great paying career opportunities for this. I currently work a full-time job but that’s just to pay my bills so I can keep continuing to chase my dream.

I train with Jason Georgianna (Head Coach) and Kobb Thongsai (Muay Thai Striking Coach). My training Partners are Adam Fugitt and Raymond Hill two of the most deadly welterweights in the PNW. I also have two other amazing partners that come in solely to help keep fresh bodies on us. I haven’t had Ray in a while due to an injury, but Adam is the sharpest fighter on the block right now so I stay prepared and fight ready with this kind of corner behind me. 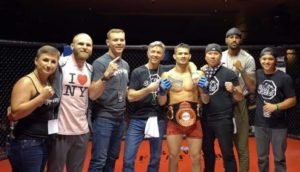 I have definitely taken to Jiu-Jitsu and fell in love with Muay Thai. I love to do it all, I love any position or striking scenario because everything requires a correct rebuttal or you’ll be met with the unexpected.

You’re set to fight Aaron Thomson coming up. What do you think about him as an opponent and how do you see this fight playing out?

I respect him like I do all that share a cage with me. I intend to end this fight as I have before. First-round, by way of finish no specifics just that I have a job to do and it will be done.

Is it correct your first amateur fight was at 185?

My first fight was a catchweight on one day’s notice at 190lbs then we made the move to Welterweight where the current fight is actually booked. It’s the weight class I intend to stay in and weight cut is still going good though!

Is there someone on the regional scene you have your eyes on to fight?

Yes anyone that will sign on the dotted line! I absolutely would love to fight on some bigger shows so it could be anybody.

What are your plans moving forward? Is it the UFC or maybe something like Bellator, PFL, Rizin, or any other promotion?

Moving forward my manager Matthew Dodge with Dodge Sports will help me decide that. We plan on dabbling wherever the fight is right!

if I wasn’t fighting I’d be working some crazy job making some crazy money living a quiet life out in the Midwest. Somewhere I see myself gravitating towards in retirement

Like anyone, we all strive to find peace or what makes us get out of bed in the morning. Well some are built differently and we wake up and cannot live the 9-5, we can not just fall into line and take zero risks. I wake up and want to feel alive every day and be present. I need to know I earned my right to lay my head down at night and gave my all to earn and strive for better futures for my self, my family, and my gym. It’s a tough tough tough profession to put a family through. So a lot of men fight for their families. I fight because we all fight every day. We fight to get out of bed, not to eat that pizza or cookie, most of all we fight to be happy. That’s why I fight because when people will see me doing what I love, and witness what peace a fighter can possess but be so deadly in the cage. It brings me discipline and joy. I’m quite a simple guy and just love to compete. I’m in it for the fight, not the night…. when you understand that you understand a fighter.

Pure Combat: Battle for the Brave goes down live this Saturday, November 16 in Salem, Oregon at the National Guard Armory. The event can be streamed online via Fite.tv