John Salter’s MMA journey took him to the UFC early — a bit too early, perhaps, but he’s a very different fighter today.

John Salter entered the wrestling world at just twelve years old. It wasn’t exactly the family pursuit, but it was Salter’s father who got him into the sport.

“My dad, he never wrestled, but growing up he was really good friends with the first four time state champ ever from Alabama,” Salter told Cageside Press ahead of Bellator 233. “He talked about wrestling a lot, he went to a lot of wrestling matches with his friends, so he was really into that world. That got me really interested and I think it was one of those things just my whole life, my mom, my dad, everybody in the family just understood that as soon as I got old enough that there was going to be a wrestling program, I was going to wrestle and never questioned it.”

Even Salter admits that his family was never a big wrestling family. And while he waited for his spot on the mats, he competed in other sports. “I played football, I played baseball but I was really looking forward to starting to wrestle my 7th grade year, and after a couple of practices, it’s such hard work compared to everything else that it just kind of took over my life and became what I cared about more than anything else.”

There were other passions, mind you. America’s pastime was one of them. “First of all I loved baseball. I wasn’t necessarily great at baseball, I just worked hard and loved it and the same thing with football. I wasn’t great at it I just worked hard and enjoyed it but the thing I loved about football was it was just so much harder than baseball and I really liked that a lot.”

Hard work, for Salter, was a draw. “I’ll tell you the first day we did conditioning in wrestling, I realized that this is a different level of hard work than anything I have ever done and it just really turned me onto it.”

While Salter started his wrestling career young, jiu-jitsu came a little later. “While going through college I watched a lot of fights and I knew that I wanted to fight,” Salter recalled. “I was going to go to grad school and still wanted to fight while in grad school.”

Salter knew, however, that he needed to be proficient not just at taking the fight down, but at avoiding the submission once there. “I was so sick of watching wrestlers take people down and get subbed,” he said. Salter never wanted to be that guy. He wanted to be the fighter that dominated once on top. “So I started to do jiu-jitsu just for that reason, and really I just fell in love with jiu-jitsu.”

His attitude about the discipline came around the more he worked at it. “One of my training partners at the time was trying for me to put a Gi on, and I was like ‘I absolutely will not put a Gi on. There is no way that helps me, it is not going to make me better,’ and I put the Gi on and it’s a different world in one day. And that just changed everything, I wanted to do it all the time, I wanted to get better at it.” Salter didn’t want anybody to ever be better at him on the ground from that point on.

MMA was always the goal by the time Salter was pursuing his post-secondary education. “I was going to grad school and at first I thought ‘well I’ll fight some amateur fights, I’ll probably fight a pro fight or two and then I’ll be done.’ By the time I turned pro it was hard for me to focus on anything else because I was so motivated towards fighting and it drove me nuts to think that there was somebody out there better than me.”

That was just Salter early on. “Obviously I was an amateur so there were a lot of people out there better than me but it just really ate at me. I was training in Alabama and to think that there might somebody in the southeast that I couldn’t beat at my weight, really drove me nuts.” That led to Salter training more, committing himself more to the sport, and by the time he turned pro, he knew he’d be making a more serious run at the sport.

Then the UFC came calling. “I turned pro in March of 2009, and I had my first fight in the UFC in January of 2010.” A pretty short time looking back on it, Salter admitted. “I took my first fight in the UFC on six days notice. Looking back it probably would’ve been smart to say ‘no, I don’t need this right now, I need to keep training and get better’ but at the time it seemed like something that I couldn’t turn down.”

Salter recalls the feeling of walking out for his first UFC fight, thinking “‘oh my gosh should I be here, am I ready for this, is this something that I should be a part of?'” The sort of doubts that creep into any fighter from time to time. “You know a lots changed since then obviously, I know that I’m ready to fight on any stage, at any level, against anybody, but that’s been years of experience to get there,” he continued.

“I had a rough time in the UFC, I was 1-2 and that’s not exactly the way you want to go, and I got released.” Upon his UFC exit, Salter had just seven pro fights. He was 5-2, with a record lesser than many rookies today have going in. “It was kind of tough, it took a lot to change and to come back from that but at the same time, you know you’re a 5 and 2, young guy.” Even afterward, at just 25 and already out of the UFC, he was a young hungry guy looking to go back — which, “nobody wants to fight a guy like that in a small organization.”

It seems like ages ago now. Salter has been at the top of the Bellator middleweight division for a while. He previously went up against middleweight champion Rafael Lovato Jr. Salter and Lovato collided immediately before the latter’s title win, and it’s a fight Salter wants back. “Absolutely that’s what I want. You know, Lovato is a stud and he’s just a great guy, he’s a great representation of the sport, glad to see him as the champ but man I want that fight back,” said Salter. “I want to do it again and I think that fight, with the things I’ve changed, I can take title.”

First up, however, comes Costello Van Steenis at Bellator 233 this Friday. It’s a main event fight, one that will propel the winner forward in the 185lb division.

“I’d love to get him out of there as soon as possible whether it’s a submission or a knockout,” Salter said about his current opponent. “But I have to be realistic: this is a guy that is really tough everywhere, so I’m expecting a pretty high paced three-round fight, and I think I’m just going to have the skills to beat him wherever we go, and to keep him out of his comfort zone.”

John Salter faces Costello Van Steenis in the main event of Bellator 233 on Friday, November 8 at the Winstar World Casino and Resort in Thackerville, OK. The card airs live on Paramount Network. 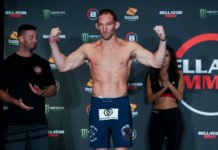 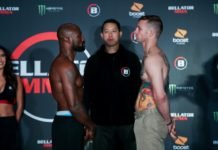 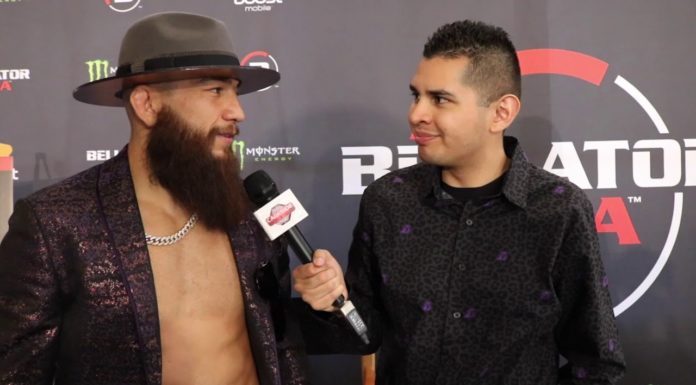