It’s been a crazy 2019 for Gustavo Lopez, the reigning bantamweight champion in Combate Americas. Lopez may find out this Friday who he’s defending his title against next.

“Definitely a crazy year,” Gustavo Lopez said of his 2019. Speaking to Cageside Press this week, Lopez, the Combate Americas bantamweight champion, reflected on the year that saw him win the belt, after being out of the promotion for most of 2018.

“It’s been a crazy ride since I won the title, and just recently defended it. First round knockouts in both, so pretty excited about it,” he said.

And that, after being outside the company just a little over a year ago. “I did kind of leave Combate for a second, because we didn’t agree on certain things,” he stated. “We finally worked it out, and just continue fighting. Combate’s treated me very well.”

Costa Rica’s Andre Morera, a.k.a. Barquero, is taking on Eduardo Alvarado Osuna this Friday at Combate Americas: San Antonio, and the winner of that fight could be next up for a shot at Lopez’s title.

“I’m hoping. I feel like I really don’t know what Combate has decided, who they’re going [to have] fight me next,” Lopez said. “That’s a good potential fight. I’ll be looking at it. I just want to compete as soon as possible. I want to see whoever is the best in Combate. I want to fight them.” 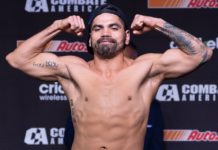