Tito Ortiz vs. Alberto Del Rio might have been hosted in Las Vegas, were it not for a difficult commission, the former WWE star has revealed.

Much of the build-up between Tito Ortiz and Alberto Del Rio’s headlining fight on December 7, part of Combate Americas debut on PPV, has been about defending the fight itself. Thanks to Del Rio’s work as a professional wrestler (he’s a former WWE champion), and comments by the likes of Chael Sonnen about the fight being a work, Ortiz and Del Rio have been busy doing damage control.

Rest assured, Del Rio told Cageside Press this week, everything is on the up-and-up. “It’s really ridiculous, stupid for people to think that,” he said of the notion the fight is a work. “But I know they only say that because one person, another fighter, said that it was not a real fight. Which is ridiculous, because he knows this is completely legit.”

While he didn’t name names, there’s little doubt Del Rio was referring to Sonnen, whose comments made the rounds last month. “I’m pretty sure he said it just because he wants a piece of it, because he’s not doing absolutely anything. And he wants to be part of whatever will come after the fight. A lot of people are talking about a rematch, a lot of people are talking about another fight, and he wants to fight for Combate Americas probably, because he knows we’re doing fantastic.”

Sonnen, of course, is retired, but we all know how retirements in MMA go. In any case, Del Rio, for one, has been taking this fight seriously. While he usually trains at home in San Antonio, he’s been at The MMA Lab in Phoenix ahead of his fight with Ortiz. “I’m in Arizona, I’ve been there for the last five weeks, and I’m going to stay there until the week of the fight, completely focused. I needed to leave my family in San Antonio, and focus on this task, this mission that I have to go and face Tito Ortiz in McCallen, Texas,” he sated.

Lest fans have forgotten, Alberto Del Rio, born José Alberto Rodríguez, spent years fighting in MMA under the name Dos Caras Jr. He once shared the cage with Mirko Cro-Cop, a fight that did not go so well for him. But he finished his MMA run at a respectable 9-5, and can be seen as a forerunner to modern day WWE stars like Brock Lesnar, Bobby Lashley, and Jake Hager trying their hand at MMA.

Two legends, @titoortiz and @PrideOfMexico, will meet inside #LaJaula! Don't miss the most anticipated fight of the year, on December 7th from McAllen, Texas. What side are you on?#TitoVsAlberto #WhatSideAreYouOn pic.twitter.com/RQOQmKJHhy

As for how big MMA was for him during his run in the mid-2000s, Del Rio told Cageside Press that “it was pretty big. I was just doing MMA for five, almost six years. I was not doing pro wrestling at that time, pretty much because there was no money in pro wrestling for me. There was, but it was not good money. And I started doing MMA for business.”

“I’m not going to lie, everybody knows that I’m an honest man. I’ve been doing pro wrestling because pro wrestling is the love of my life. All my passion is in pro wrestling,” Del Rio continued. “But back then when I was younger, MMA gave me the opportunity to make more money and to start building myself, my career. And MMA was the one taking me to the place where I am right now. Because if it wasn’t for that fight in Japan, I would have never had the opportunity to get big contracts in Japan, to get those opportunities in Mexico, to have companies in Mexico say ‘damn it, Dos Caras Jr. just beat the crap out of this Japanese champion, we need to have him.'”

When Del Rio returned home to Mexico, he was able to use his time in Japan, where he fought for both DEEP and PRIDE, as a bargaining chip. “I started asking for more money, saying ‘for Japan,’ and then the rest is history. I owe a lot of things to MMA, and that’s why I’m doing this,” explained Del Rio. “That’s one of the reasons, because there are several reason why I’m taking this last fight.”

The Ortiz vs. Del Rio fight is going down in Texas, and there’s a multitude of reasons for that, beyond the fighters (Del Rio lives in the state). Del Rio noted it’s about “the networks, sponsors, commissions” and took time to call out the NSAC. “By the way Nevada Commission, you guys are you know what, A-Holes.” Combate Americas wanted to do the fight in Vegas, the fight capital of the world, Del Rio revealed, “but it’s just, they’re ridiculous.”

As for any talk of this being a grudge match, the former WWE star said that “there’s nothing personal. We’re two athletes, we know what we’re doing, we’re professionals.” That said, Del Rio added “I’m not going to say that I don’t like him, but I won’t have him as a friend. I won’t have him as a friend and I think he feels the same way. I respect his career, I don’t respect his ideas, for me his ideas are pretty stupid.”

“I know he has respect for me. We don’t agree on many things, but we’re going to be fighting December 7 for this organization,” he continued.

When the pair meet, however, there’s more than respect on the line. There’s been talk of Ortiz putting one of his titles up against one of Del Rio’s WWE belts.

“Regardless of pro wrestling being scripted or not, you have to compete, you have to be an athlete, you have to put your heart and soul to be at that level, and to be able to become that man, the one carrying that strap around the world as the number one wrestler in the company. He knows that, he has been a pro wrestling fan his entire life, he said it,” explained Del Rio. “He knows what it takes to get one of those around your waist, and that’s why he wants it. I want his, because I know all the sweat, blood and tears that he put or had in order to get that strap around his waist.”

Watch our full interview with Alberto Del Rio ahead of his clash with Tito Ortiz above! Ortiz vs. Del Rio takes place December 7, 2019 at the Payne Arena in McCallen, TX. 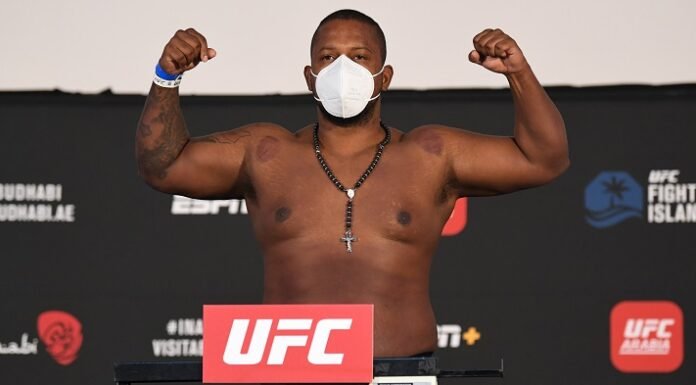