UFC Moscow goes down on November 9, 2019 at the CSKA Arena in Moscow, Russia. The card is headlined by Russia’s own Zabit Magomedsharipov, who will take on Calvin Kattar. That bout fills in for the original headliner of Junior dos Santos vs. Alexander Volkov. The Russian card is loaded with prospects, and the UFC will have two Russian newcomers this card. One of those being Shamil Gamzatov, who will fight Brazil’s Klidson Abreu (15-3 MMA, 1-1 UFC).

How will Gamzatov fare in the UFC:

Gamzatov has had a better showing in his last few fights, but early on he was more underwhelming. On the feet, he has good output and is heavy on his kicks. Gamzatov misses a lot more than he lands, however, struggling to find his range. His footwork is also flat, which is a big reason why he can’t find success with his hands. He’s at his best on top, but his wrestling isn’t the greatest, so getting there is an issue. If he does get on top, Gamzatov sits on his punches well and does have five career submissions. With questionable cardio and lackluster takedown defense, he may struggle out of the gate on the big stage. Prediction: 0-3 start in the UFC.

How Gamzatov matches up with Abreu:

Gamzatov and Abreu are very similar fighters. They both have a lot of improvements that need to made on the feet but both are good on the mat. At this point, Brazil’s Abreu is better everywhere. Not by much on the feet though, as Gamzatov does have the power advantage. Abreu looks to be the faster athlete and more accurate but just by a bit. Arbeau has better wrestling, grappling and the better TDD which makes it seem that Abreu has a significant advantage on the feet. Likely the only way for Gamzatov to win is to do it with strikes or control the top position. 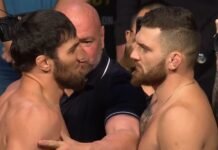 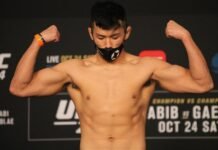 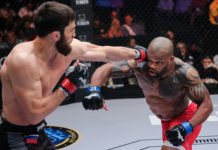