Appearing at the UFC 245 press conference, Kamaru Usman spoke of legacy, and his upcoming grudge match with Colby Covington.

New York, NY — If the cheers and jeers were any indicator in New York, Kamaru Usman is more popular than Colby Covington would like to admit.

Maybe it’s just that fans have got behind Usman because they despise ‘Chaos’ so, but either way, with the pair taking part at the UFC 245 press conference on Friday, it was Usman getting a roar of approval.

There’s been a lot said in the build-up to the pair’s UFC 245 main event showdown, but whether he can use it as motivation or not, “it doesn’t really matter,” Usman said. “I don’t avoid it, and I’ve said yes to everything. All I’m waiting for is December 14, [when] you guys finally get the fight you’ve all wanted for so long.”

There’s certainly no question that it has been a long wait. The pair have been circling one another since Usman won the belt against Tyron Woodley at UFC 235. Before that, Covington had carried interim gold, but was stripped after he didn’t make a date with Woodley, citing injury.

Usman has dealt with injuries as well, which have kept him from competing frequently, and from big money fights. Now that he’s healthy, many are curious as to what his plan as champ is, whether he’ll go on a Jon Jones-like pace, or look for big money fights.

The Ultimate Fighter 21 winner later gave his thoughts on the idea that he and Covington are equally skilled. “Everybody always says that they have a chance, but what fight have I been in in the UFC that you’ve seen as competitive?”

We’ll see how competitive Usman vs. Covington is soon enough, as the pair meet at UFC 245 in Las Vegas on December 14. 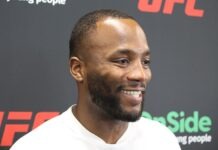 Leon Edwards: UFC, Usman Have Agreed to Title Fight, On Track for July 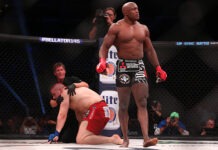