With another fighter pulling out from UFC Sao Paulo, Vanessa Melo joins the Fight Night card against Tracy Cortez.

The UFC is coming to Sao Paulo, Brazil on November 16. In a bantamweight bout, it was originally expected that Leah Letson would face Duda Santana. However, Letson would have to pull out, and Tracy Cortez was inserted into the fight. Sources now confirm to Cageside Press that Santana is off the UFC Sao Paulo card as well. With Cortez in need of an opponent, it will be Vanessa Melo (10-6 MMA, 0-1 UFC) stepping up.

The reason for Santana’s withdrawal is not known.

Out of Fight Ready MMA, Cortez earned herself a UFC contract this past summer on the Contender Series. She’s currently 6-1 and on a six-fight win streak.

Cortez has fought for the likes of Combate Americas and Invicta FC. The Arizona-born fighter is making her UFC debut on enemy soil in Sao Paulo, Brazil. This will also be her pro bantamweight debut.

On the other side of the cage will be Brazilian Vanessa Melo. Melo just recently made her promotional debut in September. She came up short against top contender Irene Aldana at UFC Mexico City.

Prior to her debut loss, Melo was on a five-fight win streak. A veteran of the game with sixteen fights, Melo bypassed Invicta FC, but still managed to face some solid competition on the regional scene. That includes a win over Molly McCann, who has been killing it of late in the UFC.

UFC Sao Paulo (UFC Fight Night 164 / UFC on ESPN+ 22) takes place November 16, 2019 at the Ginásio do Ibirapuera in Sao Paulo, Brazil. The card is headlined by a light heavyweight clash between Jacare Souza and Jan Blachowicz. 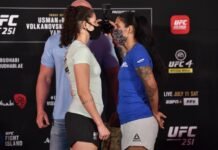 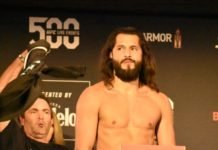