UFC middleweight Brendan Allen landed with a splash at UFC Boston earlier this month, submitting Kevin Holland and turning heads in the process.

Brendan Allen made a thunderous debut at UFC on FOX 6 in Boston just over a week ago, after winning a UFC contract on the Contender Series over the summer. The former LFA middleweight champion submitted Kevin Holland in a wild scrap in Beantown, pushing his win streak to five.

It’s been a stellar 2019 for ‘All In,’ although Allen’s biggest achievement will come in a few weeks.

“I feel good. I went out there and did what I was supposed to do both times,” said Allen regarding the Contender Series and UFC Boston showings. Although his most recent performance, he said, was not without its flaws. “Still to me, it took a little while to warm up, shall I say? It’s not really a warm-up, it’s more just kind of figuring out and calculating my opponent and everything like that. It takes me the first round to kind of figure those out.”

As a result, “sometimes it gets my butt in bad positions,” Allen admitted. “It is what it is, I fight out of it, that’s what’s supposed to happen. But it’s been a big year, it’s been a great year, the best achievement I’ll have this year comes in about five weeks.”

That achievement will be the birth of his daughter. “Me and my wife can’t wait to meet our little girl. Honestly that’s all I’m looking forward to right now,” he said, adding “Fighting or anything like that, I don’t really care about right now, it’s meaningless to me at this point.”

He’s putting his money where his mouth is. Allen later added that “I got offered another fight, but we turned it down for that reason. I planned out what I planned, and I gave her my word.”

“Hopefully I’ll be back in camp this year, but I won’t fight anymore this year,” he stated.

It’s not as if he’s been lacking for fights. Boston was his third fight in 2019. Earlier on, he fought at a breakneck pace when he was an amateur, turning pro after 13 fights. “I’d been training for a long time, and I just wanted to test myself. That’s what I did. I just stayed busy, stayed in shape, stayed getting ready, stayed in that feeling. That was really it.”

To motivate himself, Allen was “constantly trying to test myself against the best guys that I could. I was always trying to set little records for myself, things no one had done around here. Or trying to beat records that had been set. That was always something that kept me going.”

“Then it was time to face better guys and bigger things, and still going to college.” College and other factors necessitated a slower pace. Allen was also looking to improve, and find a better camp.

Training with Duke Roufus and company clearly paid off in spades at UFC Boston. Against Kevin Holland, a short notice replacement for Eric Spicely, “the plan was to beat him up everywhere.”

“I didn’t feel he was better than me anywhere, I didn’t feel that he could beat me anywhere.” Allen’s only concern was that Holland might hit him with “something crazy. Maybe I wasn’t on my P’s and Q’s, and he hit me with a jumping knee.”

“I really didn’t think he could do anything to me,” he continued. “So it was just beating him up everywhere, staying in his face. I like to walk forward anyway, so that was great.”

He admits, however, that Holland was a step up in competition. “I went from fighting a guy who’s just a tough guy, he has pretty good jiu-jitsu, but I still didn’t feel he would be me anywhere either, he was just tough, he could take a beating, to fighting the number 21 guy in the world, according to Tapology and all that stuff,” said Allen. “Don’t get me wrong, I don’t trust all these rankings, but needless to say, he was number twenty-something in the world, and I just jumped in there and did what many guys couldn’t do, and finish him.”

Watch our full interview with UFC middleweight Brendan Allen above! 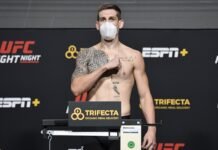 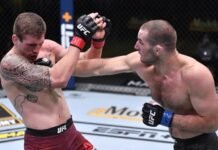 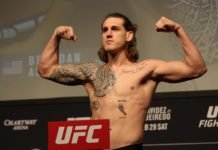