After an upset win over Nick Newell, Manny Muro is looking to share his culture, and make his mark in Bellator MMA.

Uncasville, CT — Manny Muro was not a popular figure at the Mohegan Sun Arena on Saturday night. That’s to be expected. At Bellator 232, Muro upset local hero Nick Newell, taking home a split decision win after rallying back from a disheartening opening round.

Newell was one of the big the stories heading into the second of two back-to-back Bellator cards. Coming out of the event, it was Muro, a Native American of the Kiowa tribe, in the spotlight.

Speaking to media outlets including Cageside Press following the fight, Muro gave his motivations for taking the bout. “When I got this fight offered to me, I jumped on it because Nick is a quality opponent,” he said “I knew he had a big, huge fan base. And I’m trying to make my mark as a martial artist, that I’m world class as well. That’s my goal.”

Muro is all about being the best. And in taking the fight, he looked straight past Newell’s handicap (Newell is a congenital amputee). “He’s a quality guy. He’s going to have a great career, he’s going to go on to do amazing things.”

“I’ve seen this as my opportunity to make a stand,” he added. “They made it a part of my contract that if I did put on a show right here, that I would get a [long term] contract.” Hopefully, that win was enough. “I want to be a signed Bellator fighter. I want to represent the company. They took care of me and my team from top to bottom. And it was just world class.”

Of course, Muro heard it from the crowd Saturday, but “even the boos, I got respect and love for the Connecticut fans.” After all, they came out two straight nights to show their support, Muro pointed out. “Of course, I’m from Oklahoma, if I was to go over there and end up like this, of course the people over there would be the same thing.”

Muro’s goal, aside from winning fights, is to share his story, he said. About being a man of faith — “I’m a Christian” — and about being native American, part of the Kiowa tribe. “Being from Oklahoma, in my area, there’s not a lot of people that get opportunities like this. If this night, this moment, I can make my whole state and people, native people proud around the U.S. and everything, this was the opportunity to do it. That was a huge platform.”

Muro knows he was brought in to lose Saturday night, especially coming in after a rough stretch. He’s still focused on the top, however. “Mark my words right here: if Bellator signs me to a contract, I am coming for that belt,” he promised Saturday. “I’ve gotten through the bumps and the bruises in this sport. Everybody wins, everybody loses. But I am coming here to make a mark. I’m not just here to be a part of the promotion.” 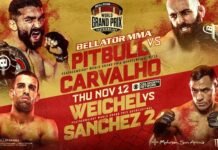 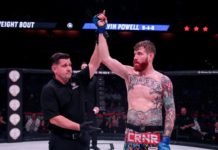