Rafael Fiziev secured his first UFC win on Saturday, putting on a strong showing against Alex White at UFC Singapore.

Rafael Fiziev was looking for his first career UFC win in Singapore, following a loss in his promotional debut in April. The 26-year-old muay thai specialist tallied a 6-1 MMA record ahead of his bout, impressing in his relatively short career. Breaking into the loaded UFC lightweight division is no easy task, with difficult competition throughout the weight class.

Just ask Alex White. Fiziev’s opponent at UFC Singapore, White has been battling in the promotion’s 155-pound division for years. He’s 2-3 in his last five fights, and 4-5 overall in the UFC. White got back in the win column in his most recent bout, defeating Dan Moret by unanimous decision in March.

Fiziev seemed to have a single-minded focus early against Alex White: attack the leg, and attack it hard. But ninety seconds in, Fiziev caught White in an exchange, setting the crowd afire, and forcing White to retreat. Fiziev would then move in, engaging in a clinch and landing knee after knee to the head, splitting the guard. White, miraculously, avoided any visible damage. And at the halfway mark, he landed a right hand, signifying he remained in the fight. A pair of lefts followed for White, who then closed the distance and drove Fiziev into the cage. He’d end up reversed, pushed back to center, where he’d land a knee before the break. They’d end the round in a much closer fight than they’d started out in.

Fiziev letting the hands fly early in round 1! #UFCSingapore pic.twitter.com/Ea1w0ycPry

Fiziev fanned on a spinning kick early in the second, but followed it up with a hard right hand. White changed levels, timing the shot well, but with his back to the fence, Fiziev was able to fight the attempt off. He began bullying White, backing him up, and attacking the body. White’s hands were low, his mouth was open, and he was showing some damage by the eye. White would again shoot for a takedown, only for Fiziev to show impressive balance in fighting the attempt off. Fiziev would land to the head with a kick, which was at least partially blocked. At the end of the frame, White was still engaging, but he was well behind.

In the third, they’d go to the ground early, Fiziev on top. They would not stay down long; back on the feet, Fiziev chopped at the leg, then mixed things up with a high kick. All the while, the pair traded, Fiziev getting the better of the exchanges. White, bloodied, was going to need a miracle, but those were in short supply Saturday.

UFC 256 Bonuses: No Surprise As Figueiredo vs. Moreno Earns FOTN 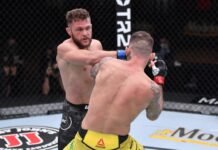