Promising striker Rafael Fiziev is joining the UFC roster, potentially fighting at UFC St. Petersburg in April. Here’s what you need to know about the prospect.

On Saturday, it was announced that lightweight Rafael Fiziev had signed a contract with the UFC. While an opponent has yet to be announced, it seems his promotional debut will be on April 20 in St. Petersburg, Russia.

Get to Know Rafael Fiziev:

Going back-and-forth between his Muay Thai and MMA career, Fiziev made his MMA debut in July of 2015. While Fiziev has fought in China, South Korea, Thailand, and Kyrgyzstan, he is still working on getting his visa to fight in the United States. He was supposed to fight on the Contender Series this past summer, but the visa issue held him back. He did get a key win shortly after at Titan FC 51, earning him an outright contract with the UFC.

What to Expect from Rafael Fiziev:

With his background in Muay Thai, expect a lot of knees from Fiziev, as he does a good job using that weapon. To the more casual fans, you will know Fiziev from his back-bending matrix-style avoidance of a head kick in one of his Muay Thai fights that went viral. That clip is a preview of the solid head movement he possesses in the cage.

There is no question Fiziev wants to keep the fight standing. However, he does have a submission victory and a TKO win via ground-and-pound while in the mount. You’ll rarely see “Ataman” shoot for takedowns because he is so dangerous on the feet with his aforementioned knees as well as his tendency to break his opponents down with hard leg kicks. Fiziev has the power to put guys away but it’s really his speed mixed in with his crazy explosiveness and his surgical striking/kickboxing that make him special. He hasn’t fought tough competition yet, but I expect a lot out of him. 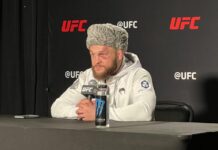 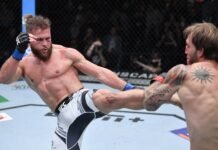