Beneil Dariush looked confident and comfortable from the start at UFC Singapore, striking well before sinking in a rear-naked choke and forcing Frank Camacho to tap in the first round.

Frank Camacho doesn’t do boring fights. They’re not his thing. Ahead of UFC Singapore, three of his five career UFC fights were Fight of the Night award winners. The other two ended with second-round finishes. The 31-year-old is 22-7 overall in his career, with a 2-3 record in the UFC while fighting at both welterweight and lightweight. He won his most recent bout, at 155-pounds, finishing Nick Hein via TKO in June.

Beneil Dariush, a 15-fight UFC veteran going into his bout with Camacho, seemed to have found his groove. Dariush had a 10-4-1 record in the promotion before Singapore, winning his last two bouts. He looked patricularly impressive in his most recent fight, when he submitted Drew Dober in the second round in March.

Dariush was on-point from the start, landing a knee to the body, a couple of leg kicks, and some left hands to the head of Camacho. Camacho marched forward, but Dariush was comfortable striking from distance. With Camacaho on the back foot, Dariush landed a takedown and took the back of Camacho. In no time at all, Dariush had Camacho’s back and was working for a rear-naked choke. Camacho tried to defend the submission, but it was to no avail, as Dariush kept the pressure on and forced Camacho to tap.

Textbook 📚@BeneilDariush gets the takedown, puts his hooks in and sinks in the RNC! #UFCSingapore pic.twitter.com/FHCxrJNHHr 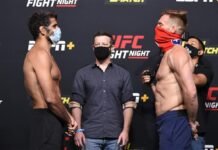 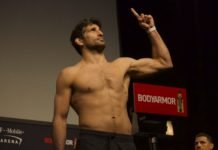