Ben Askren didn’t get the win he wanted in his return to Singapore, his old stomping ground in ONE Championship, but he did take home an extra fifty grand Saturday at UFC Fight Night 162.

UFC Singapore was an odd duck of a card to say the least. The main event was a grappling fan’s dream, but outside Ben Askren and Demian Maia, the card lacked bonafide star power. The early prelims were a mixed bag, although a few fights stood out — including the debut of Loma Lookboonmee, the first ever Thai fighter to step in the octagon.

Bonus time, however, saw the main event earn Fight of the Night honors. Maybe that will take some of the sting off what ‘Funky’ Ben Askren called a “bad decision.” That bad decision came when he opted to engage on the ground with BJJ expert Demian Maia with over a minute left in the third round. Maia transitioned to Askren’s back, locked in a rear-naked choke and put the former Bellator and ONE champ to sleep.

A lot will be made about Askren’s fortunes and future in the UFC, has he drops to 1-2 in the promotion. It’s worth noting, however, that two judges had the fight tied heading into the third, and Askren was arguably winning the round until being choked out.

Maia, meanwhile, remains one of the most dangerous grapplers on the planet, having added Askren’s scalp to his collection, which also includes wins over Matt Brown, Carlos Condit, Jorge Masvidal, Jon Fitch, and Chael Sonnen, to name just a few.

Performance of the Night bonuses at UFC Singapore, meanwhile, went to Ciryl Gane, for his heel hook submission of Contender Series alum Don’Tale Mayes, and Beneil Dariush, who submitted the gritty Frank Camacho with a rear-naked choke. 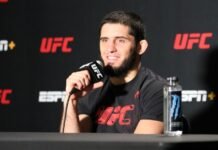 UFC: Dariush Out of Fight with Makhachev, Green to Step In As Headliner Next Saturday