Standout kickboxer Robin van Roosmalen returns to the cage this Saturday at Bellator 232, and is focused solely on MMA for the time being.

Dutch kickboxer Robin van Roosmalen has been readying himself for his return to MMA and his debut with Bellator MMA this weekend. Bellator 232 goes on Saturday, October 26 with the main card kicking off at 10:00 PM ET. The event emanates from Mohegan Sun Arena in Uncasville, Connecticut, and there, van Roosmalen takes on Cris Lencioni after a 31-month period of inactivity from MMA. The kickboxing savant seems ready to return with a bang.

Van Roosmalen has been doing his due diligence in getting prepared for this comeback to the cage. Michael Johnson and Gilbert Burns are a couple of examples of guys he’s worked with. Opponent Lencioni will presumably take things to the ground with his Gracie Barra background, coupled with Robin’s impressive kickboxing acumen. Van Roosmalen is also a black belt in judo though.

When asked if he was excited to show off that part of this game, van Roosmalen said “I don’t want to prove anything. I just want to finish my fight as soon as possible. I don’t really care how it ends, bro.”

Van Roosmalen doesn’t have a super-comprehensive knowledge of Lencioni but instead mostly focuses on his own individual efforts. “I didn’t watch any of his fights to be honest,” he said. “I let my coaches watch the fight and let me adjust little things. But I’m just focusing on me. I’m a guy who adjusts in the fight and the way I feel things.”

The obvious question for van Roosmlaen is in regards to his combat sports future. Bellator has both MMA and kickboxing brands which would seemingly work well for the Glory featherweight and lightweight titlist. For now though, it’s all about MMA. “Right now I’m just focused on MMA,” said Van Roosmalen. “If something special comes up, I might take it but for right now I’m focused on MMA.”

Van Roosmalen had other considerations beyond the dual MMA/ kickboxing brands when it came to signing with Bellator. Ultimately, he went with them, “I think because it’s a nice organization that really takes care of the fighters. They’ve got nice shows. I think the level of that is one of the best in the world.”

There was some dialogue about being in the featherweight grand prix early on. Scott Coker’s initial twitter announcement of van Roosmalen’s signing seemed to imply some involvement in the million dollar MMA tournament. Those plans ended up being put on the back burner, but that’s not to say it’s an impossibility for the future.

“Yeah it has been discussed but I would like to wait right now with the single fight,” said Van Roosmalen. “My last MMA fight was 2017 and like I said it’s a whole different game. If I wanted to go in a grand prix, I wanted to at least have a little fight before. Just to get the feeling and everything. Maybe next year.”

Bellator and Rizin’s relationship is interesting to observe through the lens of the van Roosmalen family lineage. Robin’s dad William fought in Pride FC back in the day. This presents a chance for both father and son to have significant combat sports moments over in Japan. Van Roosmalen didn’t seem to have the same level of enthusiasm with the overall idea, but did indicate some level of interest in fighting for Rizin eventually.

He said, “No really. Right now I’m just focusing on my own career. If Bellator wants to let me fight with Rizin next, I’m cool with that. But it’s just for me.” Van Roosmalen kept it succinct with the parting thoughts. He quipped, “I’m just thankful for my team and coaches. That’s really all.” 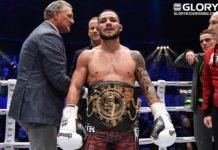 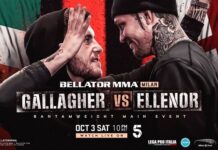