The main event of UFC 244 now seems to be in jeopardy after Nate Diaz tweeted he wouldn’t make it to New York City for fight week ahead of his Nov 2. bout with Jorge Masvidal.

UFC 244 looks to be in danger of losing its main event. Thursday, Nate Diaz revealed that he would not be making the trip to New York City, due to what appears to be a USADA violation.

Diaz stopped just short of announcing USADA, the New York State Athletic Commission, or the Ultimate Fighting Championship had officially pulled him from UFC 244. Diaz did, however, allude to having been notified of a potential violation ahead of the ‘Bad MF’er Championship bout’ that is set to take place in Madison Square Garden next weekend and vowed not to fight until UFC, USADA, or ‘whoever is F*CKING with me’ fixes it.

Your all on steroids not me pic.twitter.com/ykrZmRIoPS

“I’m not gonna play their game and try and hide it or keep quite (sp), as they suggested. I’m not gonna have my name tainted as a cheater like these other motherf*ckers who keep quiet until after the fight just so that they can get paid,” Diaz wrote.

“I dont (sp) give a f*ck about some money over my dignity and my legacy. I’m not playing along with this bullshit.”

The UFC has yet to make an official statement but in an act of foresight the company had been paying Leon Edwards to be in training camp and ready in case either Masvidal or Diaz couldn’t make it to the cage on November 2, per Chisada Malata.

Leon Edwards is currently riding an eight-fight win streak, recently competed at UFC on ESPN 4, where he defeated Rafael dos Anjos via unanimous decision, and has an active storyline with Jorge Masvidal dating back to the now-infamous three-piece and soda incident in London.

Jorge Masvidal responded to the news on Twitter and indicated that he would still be down to fight Diaz in the main event of UFC 244, even if USADA had something to say about Diaz’s ‘elevated levels.’

You not the baddest mofo in the game (i am) but you are one of the cleanest mofo’s @NateDiaz209 I’ll see you nov 2. I know your name is clean. I don’t need @usantidoping to tell me shit!

The UFC has not released an official statement on the matter. 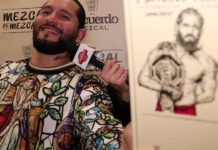 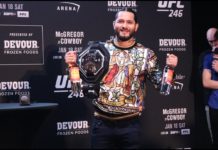