Diana Belbita came out strong in the first round, but Meatball Molly McCann kept up the pressure in rounds two and three to take home the win at UFC Boston.

It will be the promotional debut of Diana Belbita at UFC Boston. She is 13-4 and has finished her last four opponents. Molly McCann is a fan-favorite due to her brawling style and is 2-1 in the Octagon.

Molly McCann was looking for the left hand early, but Diana Belbita was throwing combinations. McCann clinched up with Belbita, but ate some knees as punishment. A combination sent McCann backwards, as she just wasn’t on the level of Belbita on the feet. A hard combination landed for Belbita, marked by a big knee to the body, and McCann waved her forward as a result. McCann kept trying to land on the feet, but found more success when she drove forward for a takedown. She landed in north-south, but couldn’t hold Belbita down. However, when Belbita got up, she found herself in a head-and-arm choke and was forced to the ground as a result. McCann landed some ground-and-pound to close out a tough round.

Belbita landed a combination to kick off the second round, fighting off a takedown. Another shot landed for Belbita and McCann clinched up against the cage. McCann was providing pressure, and worked her way to standing head-and-arm choke position again. McCann tried pulling her down multiple times, but Belbita grabbed the fence to prevent that from happening. The referee was forced to take a point from the Romanian after multiple face grabs. McCann whiffed on a takedown when action resumed in the head-and-arm position, falling to her back. Belbita couldn’t hold her down and McCann popped up and took Belbita’s back. McCann laid into her, forcing Belbita to roll and give McCann mount. The punches kept coming but Belbita stayed strong. She eventually bucked McCann off and landed a strong right hand, but it was a very good round for McCann.

McCann came out with momentum and landed a big right hand. Belbita went back to her combinations. McCann was having more success on the feet than she did in the first round, but at a big right hand. McCann’s pressure was relentless in the third round and Belbita was unable to get anything going. A late takedown attempt was unsuccessful for McCann, but she landed a big knee afterward to close out the fight. 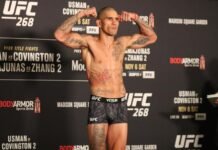