Canada’s Jeremy Kennedy, a former UFC athlete, punched his ticket to the semifinals, and punched it repeatedly, when he finished Luis Rafael Laurentino at PFL 8 2019.

Jeremy Kennedy and Luis Rafael Laurentino were meeting for the second time at PFL 8 2019 in Las Vegas on Thursday. The featherweight quarterfinal fight found Kennedy looking for revenge, after suffering just the second loss of his pro career against Laurentino back in the regular season.

The fight was the final featherweight quarterfinal of the night, two rounds to determine who would meet Daniel Pineda in semifinal action.

Kennedy clipped Laurentino with a jab early, which should have caught the Brazilian’s attention. He’d then use his hands to set up a double-leg takedown attempt. Laurentino would fight off the attempt, but Kennedy held on to the body lock, and kept pressing his opponent into the cage. He’d eventually get the fight to the ground, only to be welcomed by a gogoplata attempt. Kennedy survived, and passed from guard to half-guard.

Laurentino stayed active off his back, cycling from closed guard to submission attempts, and would attempt to use a kimura to sweep. That failed, Kennedy landed a right from the top, but Laurentino would catch a leg and threaten with a knee bar. Kennedy would roll through and escape danger in a thrilling sequence to end the round.

Laurentino opened round two with a head kick, missing the low-percentage attack. Kennedy, after dealing with the flash, took the fight back to the ground, immediately making it to half guard. Laurentino worked to the cage, but Kennedy trapped an arm, controlling the wrist, and began unloading with punches. With no way to escape and unable to defend, Laurentino could only last so long before the ref waved the fight off!

With Kennedy earning the stoppage win, that marked three of four fights ending in a finish in the featherweight quarterfinals. The win ensured Kennedy would be paired up with Daniel Pineda in the semifinals later in the evening. 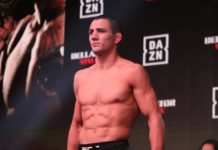 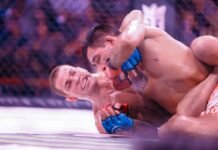