As he makes the move to light heavyweight at UFC Boston, Chris Weidman is excited to earn a shot at a man many consider the GOAT. But Jon Jones, he says, has an asterisk next to his career.

Boston, MA — Chris Weidman sets off on a new journey in his MMA career this Friday at UFC Boston. The former middleweight champ, known for his pair of wins over Anderson Silva, among other huge 185lb fights, will be making his 205lb debut in the main event of the ESPN card against Dominick Reyes. ‘The All-American’ will look to bounce back from a loss to Jacare Souza in the process.

Weidman (14–4) is following in the footsteps of fellow middleweights turned light heavyweights Anthony Smith and Thiago Santos, both of whom went on to face Jon Jones. A feat Weidman hopes to repeat, with better results, after a win over Reyes.

Speaking of Reyes, Weidman told media outlets including Cageside Press that “I’m going to say my wrestling and jiu-jitsu are probably the biggest threat for him. And also the fact that I’m a well-rounded mixed martial artist.” That’s something Weidman believes the surging light heavyweight is yet to face. “He’s a good striker, that’s what he probably brings, that’s the most dangerous— you know, I think I’ve fought better strikers. He’s bigger than most of the guys I’ve fought, but as far as precision and dangerous strikers, I think I’ve fought more dangerous guys.”

But, Weidman continued, “I think the fact that he has to worry about the takedowns and the jiu-jitsu, because that could be the end of the night for him, will change the stand-up as well. So I think me just being in the cage with him, and having him doing a little bit of that multi-tasking, is really the game-changer. He hasn’t had to deal with that. He hasn’t really had to deal with that in any of his fights.”

Weidman pointed out that Reyes has only been taken down a couple of times in his career. Especially prior to his fight with Volkan Oezdemir. “He did a good job getting back to his feet,” Weidman admitted. “But again it’s not somebody who is going to be as persistent and have the pressure like I bring.”

“That’s what really excited me when I was down at middleweight,” he recalled. There, Weidman became the man to dethrone the enigma that was Anderson Silva. “So to have the opportunity to not just shock the world once but also twice in my career and beat two of the guys that people think are the GOATs, that’s the legacy I think I want to leave behind.”

Legacy is what this is all about. And when it comes to Jon Jones’ own legacy, in terms of results, Weidman gave him the nod as the greatest. “As far as him being the GOAT, I think if you look at his record and who he’s beat and how he’s done it, yeah, he’s the GOAT.”

Of course, however, there’s a “but” to consider. “But then you look at the drug testing stuff out there — I’ll be honest with you, I’m just like a casual fan when it came to everything he did and failed, I didn’t like read into it like crazy, you know everything behind it, the picograms and all that crap — I haven’t like investigated it 100%, but at the end of the day, he’s failed multiple drug tests. And I think anytime you do that, it puts an asterisk on your whole career. And you have to say that.”

The same can be said for ‘The Spider,’ he added. “He’s failed drug tests too, for performance enhancers. I think you have to put a question on the rest of their careers, just like baseball. Besides this is way more of a devastating sport. We’re not just hitting balls over the fence — we’re trying to take each other out. Anytime a guy fails a drug test, that’s a serious thing.” 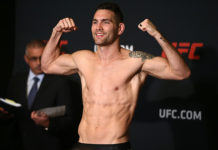