The ESPN 30 for 30 film Chuck and Tito provided a nostalgic and detailed look at the original MMA superstars throughout their rivalry.

Full disclaimer, I once had an entire online show dedicated to reviewing and dissecting ESPN’s 30 for 30.  The series has had several boxing centric films, but the only MMA feature was a short centered on Ronda Rousey several years ago.  So, the fact that the series has come out with a full-length MMA feature is long overdue.

In my opinion, there are two major things that make the series so successful:  Each film does a great job of painting a picture of the time period where the subject took place, and each piece has great interviews with an all-star list of people who were involved.  The end result, as evidenced by the long-running success of the series, is that the viewer is easily able to understand the drama and significance without necessarily having to be a fan of the sport or subject ahead of time.

Chuck and Tito does a fantastic job in the first few minutes explaining the early days of MMA, with familiar names like Art Davie and Ken Shamrock once again reflecting on the spectacle of UFC 1.  Fans who have seen any of the many documentaries on the birth of the UFC won’t see anything new, but someone unfamiliar with the sport will quickly get a clear and concise picture of a time long before ESPN+.

This is where everyone is introduced to, well, Chuck and Tito.  Ortiz told the story of being a fan of pro-wrestling and the influence of Tank Abbott inspiring him to want to be in the UFC as he became older.  Liddell’s narration was accompanied by fantastic archival footage of his pre-UFC days and training under John Hackleman.  The narrative is set by the first commercial break: you have the sport of MMA and you understand how both guys got into the sport that led them to their stardom.

In one of the more distinct parts of the documentary, we are introduced to pre-UFC president Dana White who would go on to be the manager for both Liddell and Ortiz.  Ortiz tells a fantastic story of the future president negotiating with the UFC for an impressive increase in his pay, subtly showing the audience that he has always been the businessman we are familiar with today.  Soon after, the familiar story of White and the Fertitta brothers buying the UFC is told and we are shown why Liddell and Ortiz were pushed front and center for the company.

Before becoming President of the UFC, Dana White was a tough negotiator as the manager for both Chuck Liddell and Tito Ortiz. pic.twitter.com/vplXUdB6WK

White tells the story of Ortiz being bested, badly, by Liddell in an infamous sparring session.  The audience then sees the inevitable clash between the two developing as the friends become bitter rivals.  Listening to the two, it is clear they still have different views on how and why the first fight took so long.  Ortiz asserts that he was trying to hold out and make more money with the match, while Liddell and White insist Ortiz was scared to take the fight for fear of losing.

True to 30 for 30 form, we are reminded of the unabridged history.  Neither Liddell or Ortiz were champion when their first Super Fight finally came together.  Both men were coming off losses to Randy Couture with the light-heavyweight title on the line.  With no leverage on either side anymore, the big fight was finally official.  UFC fans know the rest, Liddell stopped Ortiz in the first round with the iconic flurry that continues to live on in highlight reels today.

This is where the narrative splits.  The UFC comes out with a little show called The Ultimate Fighter, and the film illustrates Liddell’s meteoric rise and cross-over stardom as the promotion enjoys an explosion in popularity from the reality series.  We are then given an exclusive peak into the childhood life of Liddell through his mother who tells the story of his abusive father.  The world saw “The Iceman” demolishing the competition, but the film brilliantly gives a glimpse into the life of Charles Liddell and the experiences that shaped him into the man who would become one of the biggest stars the sport ever saw.

The rivalry moves on from being between Liddell and Ortiz to now being Ortiz vs White and the UFC.  We are reminded of the long-standing feud between the two, with the infamous t-shirt Ortiz wore, to the push he made for the two to meet in a boxing ring.

This sets up the rematch and the three-round classic between the two.  The fight, though more competitive, still had the same result with Liddell victorious.  The fight did incredible numbers and the two were at the summit of their respective careers.  But the film quickly turns toward the sharp decline the two endured afterward.  Liddell’s knockout losses, one after the next, play out with brutal honesty as the film shows his retirement in 2010.  Through his own words, we see the painful depth of depression he dealt with after his fighting career was over.

“The friendship is over!”

After UFC 47, the relationship between Chuck and Tito was never the same. pic.twitter.com/f2cMyJi6vB

The normally private Ortiz reveals his struggles with ex-wife Jenna Jameson and her addiction to morphine while she was pregnant with his twin boys who were born prematurely and needed to be weened off the drug in the hospital.  He also addresses the accusations at the time of domestic violence.  At the same time, his own fighting career struggled and he declared his own retirement in 2013.

Of course, that is not the end of the story.  Despite objections and concerns, Liddell and Ortiz returned to competition, this time under Oscar de La Hoya’s Golden Boy Promotions.  The fight ends unceremoniously for Liddell and the film takes an introspective look at the mentality of the athletes involved in MMA.  As told by the likes of John McCarthy, Tank Abbott, and Ken Shamrock, the passion for the sport and the ups-and-downs that the fighters go through are all reflected in Liddell and Ortiz.  The film ends recognizing that the business of MMA is bigger because of both men and their rivalry.

As a film for MMA fans, there is plenty to enjoy.  From the first-hand accounts of the pre-stardom days from Liddell, Ortiz, and White, to the revealing interviews about their personal struggles outside the cage, the documentary provides new footage and stories straight from the stars themselves.

For the general public, the pacing of the film works to its benefit.  The world of the UFC is introduced quickly and you are taken to the first fight without much suspense.   You also get a fair amount of understanding Chuck and Tito, not just “The Iceman” and “The Huntington Beach Bad Boy.”

Take any look at the biggest rivalries in the sport today, from Khabib and McGregor to Jones and Cormier: the element of bad blood when two stars collide has always been a key ingredient to big fights that capture the attention of the greater public.  Liddell and Ortiz set the standard for the big fights that followed and showed that the formula was possible in MMA.  Chuck and Tito brilliantly illustrates how and why the two men became the first megastars of the evolving sport of mixed martial arts and how their rivalry kept them intertwined in the years that followed. 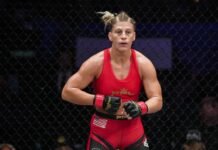