Dominance MMA’s Ali Adelaziz has been hit with a pair of battery charges stemming from two separate incidents, one at Friday’s PFL 7 show.

Managers in sports are generally at their best when seen and not heard, unless it’s during negotiations for their clients. Dominance MMA head Ali Abdelaziz, a frequent flyer in terms of negative press, still hasn’t learned that rule it seems. The manager of UFC superstars such as Khabib Nurmagomedov and Frankie Edgar is currently facing not one but two battery charges — which isn’t doing his already rocky reputation any favors.

MMA Junkie was first to report news that Abdelaziz was involved in an assault on fellow manager Abe Kawa, a top rival in the relatively small world of MMA management. The incident took place Friday, with a police report emerging Monday. The altercation — more accurately a sucker punch — is alleged to have taken place during PFL 7, at the Mandalay Bay Event Center in Las Vegas. The details do not paint Abdelaziz in a good light.

According the police report, Abdelaziz struck Kawa “in his face with a closed fist.” Security at the venue separated the pair. Kawa later told police that “while in the VIP area Aziz approached him stated he needed to speak with him and subsequently struck him in the face with a closed fist on the right side of his face for no reason.”

In addition to Kawa’s account, two police officers working at the show witnessed the incident. As did the fiancée of Anthony Pettis, former UFC lightweight champion.

As a result, Abdelaziz is facing a charge of battery. The issue is particularly concerning given Kawa’s position with First Round Management, one of Dominance MMA’s biggest rivals. Not to mention Abdelaziz’s own questionable history, some of which was aired by Conor McGregor during the build-up to UFC 229. Abdelaziz was also booted from a PFL event in 2015, after a physical exchange with a fan.

That questionable history also includes an altercation with Colby Covington that has led to a second battery charge. Per MMA Fighting, a misdemeanor battery charge was slapped on Abdelaziz following a confrontation between himself, client Kamaru Usman, and Covington after UFC 235. Video of the incident was later released by TMZ.

A bench trial for that battery charge has been pushed back to November 25, after originally being scheduled for October.

Reached for comment by Cageside Press, Bob Bennett, Executive Director of the Nevada Athletic Commission, said only that “at this time we have no comment” in regards to the charges against Abdelaziz. Mangers in the state of Nevada are licensed by the commission. Per the NRS 467.100, the Nevada Revised Statue concerning licensing, “An application for a license constitutes a request for a determination of the applicant’s general suitability, character, integrity, and ability to participate or engage in, or be associated with contests or exhibitions of unarmed combat.”

The Professional Fighter’s League, meanwhile, has acknowledged that it is looking into the incident. 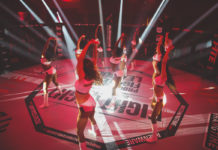