Most fighters would plan to take storied striker Joe Schilling down, but not Bellator 229’s Tony Johnson, who wanted to test himself against one of the best.

Temecula, CA — Contender Series alum Tony Johnson had an opportunity to take on one of the best kickboxers in the world at Bellator 229: Joe Schilling. ‘Stitch ’em Up’ entered the bout on a two-fight win streak, and was certainly more committed to his current MMA run.

Johnson, however, served up his first loss since 2015 in MMA, with a knockout blow delivered in the third and final round. Speaking to Cageside Press following the event, Johnson (8-3) recapped the fight.

“Man it took me a while to find my range, but I felt like in the third round, he was slowing down a little bit. He was getting a little tired,” Johnson recalled. “My cardio was good, I was picking up, close the distance, and I just caught him with that counter hook.”

Turn it on he did, delivering the knockout blow just over two minutes into the round. The standing approach was interesting, given the usual game plan against Schilling is to double leg him all day.

“If you’ve watched me fight, I don’t wrestle,” Johnson pointed out, before adding that “I can wrestle. I come from American Kickboxing Academy, where it’s the land of wrestlers. So I’m forced to wrestle.”

“But I wanted to stand with him,” he continued. “I wanted to prove that I can stand with anybody. I respected him as a competitor, so I was like ‘man I wanted want to see who has better standup for MMA.’ Little gloves change everything.”

After being snubbed on the Contender Series — Johnson won his fight, but didn’t get a UFC contract — it feels like he’s sent a message to that other organization. Johnson downplayed it, however. “I’m happy. I’m happy that I came over to Bellator. Attention Bellator middleweights, man. Guess who’s here?!”

Bellator middleweights will have to wait just a little, however, as AKA’s Tony Johnson will return to the boxing world next, with a bout scheduled next month.

Watch our full Bellator 229 post-fight interview with Tony Johnson above! 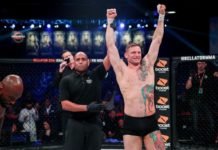 Tony Johnson Out, Andrew Kapel in Against Joseph Creer at Bellator 249 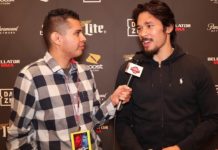 Bellator 229: If Goiti Yamauchi Gets His Way, It’s Him Versus Benson Henderson for Interim Gold 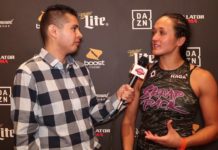