Temecula, CA — Stop us if you’ve heard this one before: there are too many interim titles in MMA. It’s a common complaint, but following Bellator 229, a case can be made that one is necessary for Bellator’s lightweight division. Goiti Yamauchi, who defeated Saad Awad to make it two wins in a row, and five of his last six, is certainly pushing for it.

Yamauchi spoke to Cageside Press following his big win in Temecula on Friday, reflecting on the fight with Awad, which ended in a first round submission, and what comes next.

“The fight, it is what it is. Anything can happen in the fight,” Yamauchi said. “But I was ready for any situation inside the cage. I kind of fought a little bit more smart, that’s why I got the win.”

While many saw the pairing as striker vs. grappler, “I’m not considered just a grappler, I’m a complete fighter,” Yamauchi corrected. “But [Awad]’s very aggressive, he likes to bring the fight. I was waiting for it. I caught him with a kick, after that I knew that he would come strong, and I was just waiting for that moment, that I could finish the fight quick.”

Yamauchi has been calling out one name of late: Benson Henderson. And now may be the time that the bout gets made. “It’s been a long time that I’m calling [out] Ben Henderson. I think this is the fight that we need to make it happen,” he told us.

“It’s nothing personal, just business. I just want to face the best guys in the world,” he continued. “Ben Henderson is one of the most important guys in the lightweight division, in all organizations, and especially here in Bellator. He’s very very tough. He’s probably the next challenger. So I want to fight him. There’s [not] any other fight I want to make, just against Ben Henderson.”

If he gets his way, it could very well be for interim gold.

“That’s what I’m thinking. I’m going to push Bellator. We’ve got to push Bellator to make an interim belt,” said Yamauchi. If double-champ Pitbull goes to the finale of the featherweight grand prix, he pointed out, it’s going to take a long time before he’s available to defend the title again. “We need to make an interim belt to make this weight class competitive. We’ve got to move.”

Watch our full Bellator 229 post-fight interview with Goiti Yamauchi above! 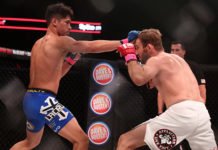 Bellator 237: Goiti Yamauchi Excited to Return to “Most Important Place to Fight in the World”