The Bellator featherweight grand prix second round is set, with A.J. McKee opening it up against Derek Campos, and Patricio Pitbull fighting in March against Pedro Carvalho.

Following the final opening round fight of Bellator’s featherweight grand prix, the winning fighters were set to choose their fate moving forward into the second round. A random draw would see who picked in what order. Fighters could choose based on date, and as the bracket filled up, on opponent.

Each fighter had thirty seconds to make their choice. And it was A.J. McKee, who won big at Bellator 228, selecting first. With no fighters on the board, McKee opted to fight as soon as possible, in December. He called out Adam Borics as well, but whether that would happen remained to be seen.

However, Borics happened to have the second pick. He opted to pass up McKee, and selected January, citing a small foot injury requiring a later date.

Former bantamweight champ Darrion Caldwell selected third. Having defeated Henry Corrales earlier in the night, his coach could be overheard suggesting a March date. Which is exactly what Caldwell selected, giving himself plenty of time to prepare. ‘The Wolf’ then called out champ Pitbull.

Daniel Weichel had the fourth pick. He opted for the February 2020 date, and through four fighters, not a single match-up was set. That would change as Emmanuel Sanchez had the fifth selection. He opted to choose Daniel Weichel. “He knows he didn’t beat me, that’s why,” Sanchez said.

The next match-up made came when Derek Campos made the sixth selection. Campos would choose the undefeated McKee, leaving just two names available — Borics and Caldwell.

Pedro Carvalho chose seventh, noting he wanted to fight in December. Since that was taken, he chose Darrion Caldwell in March, saying he wanted to prove he was the best in the world, and beating a former champ would do that.

By default, that left Patricio Pitbull to face young prospect Adam Borics. An interesting turn, as many were anticipating either Pitbull and McKee, or Pitbull and Caldwell for the second round. But wait! In a twist, Pitbull, as champ, was offered the option to replace any fighter in the bracket. Citing age, needing rest, Pitbull selected March. That gave him a choice between Darrion Caldwell and Pedro Carvalho. Calling Caldwell “a loser,” Pitbull chose Carvalho. As a result, Caldwell will meet Adam Borics in January.

The second round is set, and the Bellator featherweight grand prix gets back underway in December, as A.J. McKee faces Derek Campos. 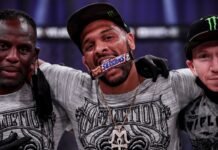