The ‘Queen of Bare Knuckle’ will invade Bellator at this October’s Bellator 231, against Brazil’s Ilara Joanne.

‘Rowdy’ Bec Rawlings will finally step into the Bellator cage next month. After signing with the promotion over the summer, Rawlings, a former Invicta FC and UFC athlete, will make her debut at Bellator 231 in Connecticut. There, she’ll face Ilara Joanne. MMA Junkie was first to report the news.

Rawlings (7-8) joined the UFC as part of The Ultimate Fighter 20, which introduced the women’s strawweight division to the promotion. She fell short on the show, however, and lost her fight at the finale, against Heather Jo Clark. However, a popular figure from her Invicta days, Rawlings would get several more looks in the promotion, winning a pair of fights against Lisa Ellis and Seo Hee Ham, before dropping four straight to end her time with the organization.

The end of her UFC run also saw her struggle to make the strawweight limit, and she jumped to flyweight for her final two bouts.

Outside the UFC, however, Rawlings reinvented herself. Stepping away from MMA, she joined the fledgling Bare Knuckle FC, becoming one of their first stars and earning the moniker ‘Queen of Bare Knuckle.’ Rawlings went 3-0 in the sport, winning and defending the Police Gazette Bare-Knuckle Championship, and later adding the World Boxing Foundation Latin American championship as well.

While her BKFC contract has reportedly expired, Bellator has been known to allow fighters to compete in other disciplines, notably Michael ‘Venom’ Page, who has taken a boxing bout during his Bellator run. Recently signed Cris Cyborg also has permission to dabble in boxing — meaning Rawlings may have the opportunity to continue her bare knuckle career at some point.

In the meantime she’ll face the 8-4 Joanne on October 25, 2019 at Bellator 231 in Uncasville, CT. The card is headlined by Roy Nelson and Frank Mir, meeting for the second time. 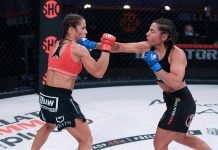