Having made a successful return to competition earlier this year, Urijah Faber is waiting on the UFC to show him the money.

Vancouver, B.C. — Urijah Faber has always had a keen business sense, and he knows what he’s worth. So competing with a four-year old contract isn’t exactly something the ‘California Kid,’ now clearly middle-aged at 40, is keen on.

Faber stopped by back stage at UFC Vancouver on Saturday, to talk about his future — and that could include renegotiating his UFC contract.

“I’ve talked a little bit about another fight, but nothing concrete,” Faber told media outlets including Cageside Press. “A couple guys just got scheduled. Song Yadong just got scheduled against Cody Stamann, who’s a guy that I’m coaching and helping out, so I’m excited for that one.” There’s no names on his radar currently, at least not that he’s willing to let slip.

“Just kind looking at options right now. I’m trying to have a discussion with the UFC, and see kind of what the plan is. There’s a lot of interesting things happening with the weight class,” said Faber, who deemed himself “in a holding pattern.” Enjoying some family time. In fact Faber flew in for UFC Vancouver from Hawaii, and said he was heading right back to the Hawaiian islands the following day.

Still, the plan is to fight. “Most likely. I don’t have to, but I’d like to. I’ve been itching to fight, to be honest.”

His comeback, Faber told Cageside Press, was before the UFC bantamweight division was blown wide open. “I decided to come back before T.J. got popped, and before other people were injured,” he said. “It was a personal thing for me.”

Rather than title opportunities, “the biggest thing is the landscape. In my opinion, the most exciting part about the sport right now is ESPN, about the global expansion, about the other organizations out there. I don’t know. I’m under contract with the UFC, but I’ve heard what organizations are paying across the globe, and the sport is just rising and rising. I’m a UFC guy, I want to fight in the UFC, but my contract is four years old.”

Faber says he has three fights left on his deal. And fixing it could be a big factor in him continuing to fight.  “I’d like to rehash things, and say ‘look, I want to be a warrior for you, but let’s have it make sense.'” Asked if renegotiation could have a bearing on whether he ever steps foot in the octagon again, Faber responded “Yeah, probably.”

After a thrilling return to action against Ricky Simon earlier this year, it’s clear Faber (35–10) still has fight left in him. Whether he can win the battle at the bargaining table with the UFC remains to be seen. 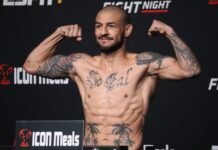