We spoke with Emmanuel Sanchez about his opening fight in the Bellator Featherweight Grand Prix, who he wants next, and why he is the dark horse of the tournament.

Bellator kicks off their third championship Grand Prix at Bellator 226 this weekend. This incarnation will feature one of the deepest weight class in the organization, the featherweights. The weight class is so rich with talent, the promotion extended the tournament from the usual eight combatants to sixteen. The Grand Prix will showcase four current or former Bellator title holders, fighters on long winning streaks, and three undefeated fighters. With all sixteen fighters having a strong chance of becoming the eventual champion, Emmanuel Sanchez believes many people are overlooking him.

“Absolutely I feel overlooked.” Sanchez told Cageside Press in an exclusive interview. “When they ask me who I think is the dark horse, I’m going to say me. I know where the eyes and attention are, it isn’t on me…. I don’t know how the betting odds go or who the favorite it… I do know I plan on taking everyone out.”

While many prognosticators are viewing Patricio “Pitbull” Freire, Juan Archuleta, AJ McKee, and Darrion Caldwell as the top fighters in the competition, “El Matador” believes he should be in that conversation. The Wisconsin native flaunts an impressive 18-4 record with a 10-3 tally under the Bellator banner. He has won five out of his last six bouts and already holds five victories over fighters in the field of competitors. He views his well-rounded skillset as a tough match-up for anybody.

“If there is anybody I can compare myself to and look up and be like, it is Georges St. Pierre and Mighty Mouse [Demetrious Johnson],” Sanchez stated. “I have the ability to fight anywhere and adapt to any fighting style. I’m not just a striker. I’m not just a jiu-jitsu guy. I’m not just a wrestler. I am a complete fighter, a mixed martial artist. I can do it all.”

The 29-year-old’s only recent loss came to the current Bellator featherweight and lightweight champion, Freire. Despite dropping a very close decision — which some believe he should have won — he was competitive enough against the legendary fighter to build Sanchez’s confidence.

“I believe it has made me a better fighter,” Sanchez said while reflecting on his loss to Pitbull. “I know he is considered the best. I thought he would hit a lot harder and be harder to hit… Knowing I have that as a notch or a chip on my shoulder, I believe I am ready to go out and unleash all my skills… I truly believe in myself. Now I know what I am capable of.”

“This is not wrestling, this is MMA. This is real fighting.”

The Roufasport team member is matched against Tywan Claxton in the opening round. The two battle this Saturday on the main card of Bellator 226 at the SAP Center in San Jose, California. Claxton enters the competition as a bit of an unknown wildcard. He sports a perfect 5-0 record with four stoppage victories but will be taking a massive step up in competition in the more experienced Sanchez.

“I believe I have the advantage over him everywhere, except wrestling,” Sanchez said. “He’s a former wrestling champion, has a strong pedigree… This is not wrestling, this is MMA. This is real fighting, we are going to find out how true of a real fighter he is… I’m looking to take him out in the first round either by knockout or submission.”

Freire’s featherweight title will be on the line during each round of the tournament with the eventual winner being crowned both the Grand Prix champion and division champion. Sanchez said he wants a piece of everyone in the field but is focusing on three familiar foes in the future rounds of the tournament.

“Obviously I want Pitbull again,” Sanchez said. “We will have see how it goes down with him and Juan Archuleta. I think it is pretty obvious too that I would like to get my losses back to Pat Curran and Daniel Weichel, especially Weichel because he knows that he didn’t beat me.” 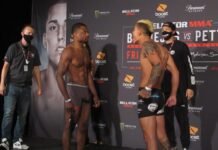