After splitting the first two rounds on the feet, Heili Alateng went to his wrestling to defeat Batgerel Danaa at UFC Shenzhen.

It’s Mongolia vs. China in UFC Shenzhen’s second fight, as Batgerel Danaa and Heili Alateng will make their UFC debuts against each other.

Heili Alateng doesn’t have the most impressive record at 12-7, but he has three submissions and four knockouts. A friend of his, Batgerel Danaa, will be standing across the Octagon from him. Danaa is 6-1 with four finishes and won both of his fights in 2018 after a two and a half year layoff.

It was a bit of a conservative first 30 seconds until Heili Alateng landed a solid pair of punches that got his home crowd to pop. Danaa was keeping his distance with long strikes, while Alateng was trying to explode in with big strikes. He caught Danaa with a big right, but Danaa got back on his horse and kept moving. A huge counter-right landed for Alateng, then another right hand as he sent Danaa backwards. Danaa fired back with a blitzing combination of his own and the round ended shortly after.

Cageside Press scored the round 10-9 Alateng

Jabs were fired out by both fighters to start the second round, and Danaa was having more success in the early going. Alateng was still headhunting, but was not landing with consistency. Danaa’s combinations were finding the mark and he began hunting for head kicks. Right hands landed for both fighters and Danaa pushed forward, forcing Alateng to clinch up defensively. A nice two punch combination landed for Alateng, then Danaa responded with a quick takedown towards the end of the round.

Cageside Press scored the round 10-9 Danaa

It was all even heading into the final round, and Danaa landed a pair of heavy blows to kick things off. He rushed forward, but Alateng clinched up briefly to slow things down. A quick one-two landed for Alateng, and Danaa threw one right back. Alateng grabbed the leg of Danaa, but was hit with a jumping knee by Danaa’s free leg. Alateng held on and eventually got the takedown. Danaa stayed active on his back, throwing upward elbows and constantly moving until he stood up. After defending one takedown attempt, he was thrown to the ground by Alateng. Punches were thrown from both fighters as Alateng closed out the fight in guard. 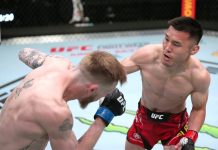