A confident Tyrell Fortune was looking for bigger names, but if you ask to fight him, you’re more than likely going to end up fighting him. Which is why Rudy Schaffroth got the nod this weekend.

As an undefeated heavyweight, Tyrell Fortune (6-0) is one of the hot prospects to watch out for this weekend at Bellator 225. Our own Shawn Bitter has been all over that, as always. But Fortune really does appear to be something special. He’s a NCAA Division II champion with Grand Canyon University. Four finishes in six fights. Eager to test himself against tougher competition.

Bellator 225 opponent Rudy Schaffroth is undefeated as well, with an identical 6-0 record. Yet to Fortune, nothing about his current foe stands out. “Nothing. Nothing stands out.”

In fact, this wasn’t really the fight Tyrell Fortune wanted, he told Cageside Press in advance of the fight. “Rudy asked to fight me, so if you ask to fight me, then we’re going to fight.” Really, it’s that simple.

“I was definitely looking for somebody with more experience. Somebody not with the same record,” he elaborated. “Bellator was looking for opponents for me, they hadn’t found one yet. Rudy trains with my twin brother [Tyree], I told my brother I didn’t have an opponent. I think he went back to the gym and said something.”

As a result, “then Rudy called Rich [Chou, Bellator matchmaker] up and asked to fight me. They asked if I would fight him, I said yeah. He asked to fight me. That’s how the fight came about.” Fortune, however, had set his sights a bit higher. “I was looking to fight somebody with more experience. I was really looking at Timothy Johnson or the Russian, they’re both fighting on the same card. I’m still looking to hopefully fight one of them after this, because they both have better records than I do. I think those are both good challenges.”

Johnson, of course, left the UFC for greener pastures in Bellator last year, exiting the promotion on a two-fight win streak. The Russian in question is Valentin Moldavsky, who pulled out of the fight with Johnson, to be replaced by another UFC vet, Azunna Anyanwu.

Having said all that, Fortune added that “I think Rudy’s a good fight. I think he’s definitely not somebody I can take lightly.”

It’s just that, like he said, “I was just looking for somebody with more experience than I had. Somebody that would be more comfortable, and maybe not intimidated, and who would really come out to fight.”

Fortune, from his perspective, sees a bigger upside for his opponent, really. After all, despite identical records, Rudy Schaffroth doesn’t have the recognition Tyrell Fortune does at this point. “I think for him, this fight is very personal. He can really prove something with it. I think it’s a good fight for him, he gets a lot of exposure if he comes away with the win.”

With that in mind, “I expect the best out of him for the first five minutes.” Not that Fortune believes it will matter.

He has reason to be confident. Fortune has been training with the man who may actually be the best fighter in Bellator MMA right now: Ryan Bader. Bader currently holds the promotion’s light heavyweight and heavyweight titles, and has done nothing but win since leaving the UFC for the Scott Coker-led Bellator.

“Really he’s been my number one training partner for this whole camp,” said Fortune. Of course, Bader was training for his own fight, and the pair have been working together for a while. Working with the double-champ comes with some big advantages.

“Just being able to pick his brain, being able to use his experience to develop and learn is a blessing,” said Fortune. “In this sport being able to pull from the champion in your weight class and the weight class below is something that you can’t take lightly. It’s an honor to be able to work out and train with the guy like that.”

Fortune is also thrilled to finally be on the main card of a Bellator event. And he’s hoping to get back in the cage before the end of the year, maybe November or December if all goes well. But one name he has moved past is Jack Swagger.

Fortune called out the former WWE star in the past, but that was more an emotional response to the massive, unearned push the pro wrestler received upon his arrival in Bellator. “He was fighting guys that were worse than my opponents, and he was scared to throw hands with the guy from the meat shop!”

“How does a guy like that with those opponents deserve main card exposure? Before I get it?” Fortune questioned. “That was just a little frustration with that, but I don’t even want to fight him. Calling out a guy like Swagger does nothing for me.”

Which is why he has his sights set on names like Johnson and Moldavsky. But first up, of course, is Rudy Schaffroth. Bellator 225 takes place this Saturday, August 24 at the Webstar Bank Arena in Bridgeport, Connecticut. 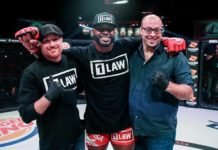 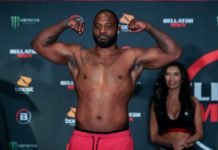 Welcome to the UFC: Shanna Young