Sodiq Yusuff came out aggressive against Gabriel Benitez at UFC 241, and after getting into trouble himself, scored a first-round finish.

Anaheim, CA – Sodiq Yusuff has been getting a good amount of attention through just three UFC appearances. On a massive stage like the main card of UFC 241, Yusuff made sure he sent the fans home happy, but more importantly, met his own expectations.

“I’m just happy I kept my word to myself. Each one of these fights is just me trying to prove I am who I think I am. I could’ve easily fought a safe fight. You guys have seen my fights before. I could’ve made it a nice and technical safe striking battle. But the moment they told me I was fighting on this pay-per-view card I knew it was a blessing. I said, ‘this is my time to steal the show.’ And I hope I got it done.”

Gabriel Benitez is not a fighter to take lightly, and throwing down with him could have dire consequences, as Yusuff almost found out. But Yusuff was on a mission Saturday night.

“I thought the risk was worth the reward. You might get clipped fighting like that. I’m a defensive fighter first before I’m offensive. I just have a lot of power so I get a lot of finishes. I talked to my parents, I talked to my mom like, ‘this is our chance to change our lives.’ Something like this, enough eyes get on me and it could be completely different from here on.”

While the hardcore MMA fanbase has taken notice of Yusuff, he has yet to make that leap to become more widely known. But that’ll come in time in his mind.

“I don’t think about myself like all big like that. The only reason why I don’t have the attention that I think I should get is because people just don’t know me yet. If you don’t know, you don’t know. You can’t be an egomaniac and expect the world to give you something you haven’t earned.”

While Yusuff did not have a specific name in mind for his next appearance, he does know where he’d like to fight next.

Yusuff put it all on the line at UFC 241 to make a name for himself, and that decision certainly paid off.

“I felt like it was going to be finish or bust. That’s why I was wilder. If I didn’t get that finish, I knew the only way out, to get that attention, was to get fight of the night. So I flipped that coin and luckily I was able to get the finish in the first round. But I would’ve shot for fight of the night too.”

You don’t hear this often, but Yusuff did not sugarcoat his experience in camp for this bout.

“I’m not going to lie. Camp was horrible. I had a really really bad camp. Just constant bruises. But you can’t let the world get to you. Like I said, I’m Nigerian, we’re built for struggle. What you see on the outside might not be what’s really going on on the inside. It was a pretty bad camp, but we got it done, you can’t be upset.”

Check out the rest of Sodiq Yusuff’s UFC 241 post-fight press conference above! 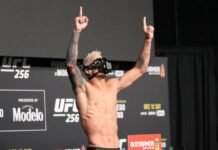