While hyped-up fights rarely tend to live up to expectations, Paulo Costa vs. Yoel Romero absolutely tore the house down at UFC 241 in Anaheim on Saturday night.

After what seemed like ages, Yoel Romero and Paulo Costa finally threw down at UFC 241 on Saturday. The fight, on-again, off-again throughout the better part of a year, had become somewhat personal for the pair, more so perhaps for Brazil’s Costa. In any case, it was a chance to Costa, with a perfect recording heading in, to show he truly belonged at the top of the 185lb division.

For Romero, it was an opportunity to silence critics. He’d already made weight, after missing the mark in two straight fights. Next, it was a matter of proving that at 42, he was still one of the best in the weight class.

Costa opened up the action with a kick, while Romero took to the outside, circling. Romero would soon land a high kick, and shoot for a takedown, briefly getting Costa down, but unable to keep him there. After a scramble, Costa nearly ate a huge uppercut. Costa then caught Romero, hurting and dropping him! Moments later, Romero came back and dropped Costa! Romero had his back to the fence but was able to circle out. Both men no doubt had new respect for the other’s power. A pair of lefts connected for Romero; he’d later miss with a spinning back fist. Costa would land a right with Romero again against the cage. Romero then connected with a jump knee, followed by a looping left hand, and went on the attack, forcing Costa to the fence. Costa, however, landed a knee low that sent Romero to the floor in pain.

Restarting, they’d stand toe-to-toe again, swinging. Romero shot for a takedown only for Costa to sprawl and land some heavy blows. Romero then caught him as they got back up. Both men had been rocked more than once in the opening round, but they’d head to a second.

The second round had Romero swinging wild, nearly slipping. Footing had been an issue for him a couple of times in the opening frame as well. Costa pushed forward, mixing up his strikes. Costa would hurt his opponent with a couple of left hands, which had Romero backing up again. Costa was really coming on strong, and they went into rock ’em, sock ’em mode briefly. Romero’s mouth was wide open, sucking back air. He’d later complain of an eye poke to the ref, but the referee wasn’t having it. Instead, the pace slowed just a little, as Costa entered uncharted territory, having never gone so deep into a fight before. Romero would finish the round catching Costa with an uppercut, and landing a takedown at the buzzer. Costa, however, seemed to land more, holding the edge in volume.

The third round had Costa slightly bloodied from damage incurred in the second. Having never been to a third frame before, the Brazilian’s gas tank would be a question. Romero continued to remain on the outside, and opened strong, throwing an uppercut and straight punches. Costa went to the body with a kick, then another, as Romero worked his jab. He ate a right, and fired a leg kick. An eye poke by Romero halted the action briefly, back underway, both men had a little more energy. Romero peppered Costa with lefts, and fired an elbow, and later a backfist. A hard uppercut landed for Romero, as he backed Paulo Costa up. Another uppercut hit home. Costa tried a bit of showboating, hands behind his back. Another uppercut landed for Romero. Costa was backed up again. Costa landed a head kick, eaten by Romero, which allowed him to drive his opponent back again. Romero would land a takedown late, but Costa would reverse and scramble up.

The bout went the distance, earning a standing ovation. This one lived up to the hype. And in the end, Paulo Costa got the nod in a fight with no losers. 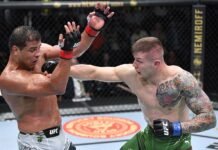